The 25-year-old is in a great position to win for the second straight week as Matthew Wolff rediscovered his form. 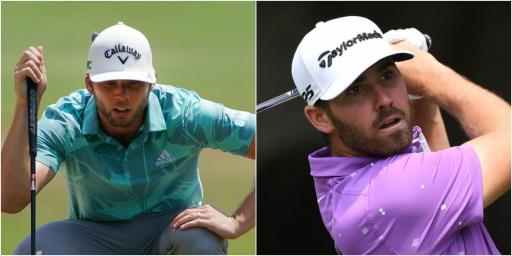 Sam Burns is in position to claim back-to-back victories on the PGA Tour at the Shriners Hospitals for Children Open.

Burns won last week at the Sanderson Farms Championship and is only two strokes behind leader Adam Schenk going into the final day.

The young superstar signed for an opening round of 66 and followed that with a stunning 8-under 63 to catapult himself into contention.

Burns, 25, made three straight birdies from seven as he made the turn at 3-under for his third round but struggled on the back nine.

His putts failed to drop after the turn and then he found the water at the par-5 16th and dropped a shot after a poorly judged approach.

Burns looked visibly annoyed as he left lots of shots out there but carded a 3-under 68 to still be in the hunt for the win.

Schenk leads the way at 18-under after rounds of 64, 65 and 66 and leads Matthew Wolff by one stroke at TPC Summerlin.

Wolff rediscovered his form and reached the clubhouse at 17-under after rounds of 64, 67 and 65 at the par-71 course.

He was one of the most talked about players when he burst onto the scene but has so far struggled to live up to expectations.

Leader @SamBurns66 is showing no signs of slowing down. pic.twitter.com/dW6SBTkR1B

He took a break from the game to concentrate on improving his mental health and it seems to have helped him immeasurably.

Through 36 holes Wolff, 22, made 13 birdies and one eagle, his only blemishes a bogey and a triple bogey after one wild tee shot.

Now Wolff is in search of his second PGA Tour victory after he won the 3M Open in July 2019.

"It was pretty gusty out there," Wolff told Sky Sports.

"Luckily on the back nine I turned it on and made a few."

Schenk is being chased by Andrew Putnam, Sungae Im and Chad Ramey who also make up the top 10.

If Burns were to win he would move into the top 10 of the world golf rankings for the first time.

He was previously ranked as low as 163rd earlier this year, and a victory would all but seal his place in the US Presidents Cup side.

The most striking thing about Reed's missed cut was that he struggled in all facets of the game.

He's scheduled to play next week at the CJ Cup but will need to drastically work on his game in the coming days.

PGA tour
sam burns
matthew wolf
Shriners
sungae im
TaylorMade
Previous
Is the Tiger Woods comeback on? The big cat is BACK on the course with his son
Next
Sam Burns could equal INCREDIBLE Tiger Woods record at Shriners Hospitals Open

Golf news
PGA Tour pro comes to the DEFENCE of golfer with a UNIQUE swing and dress sense
Golf news
Fostered girl, nine, is on her way to The MASTERS for the Chip, Drive & Putt
Golf news
DEBATE: Just how bad is slow play at your club? "It's CONTAGIOUS everywhere!"
Golf news
Group of golf fanatics create their own golf hole out of SNOW in awesome clip
Golf news
Protesters set to STORM popular UK golf club over housing development plans