The World No.1 has work to do if he is to achieve a three-peat at his home championship. 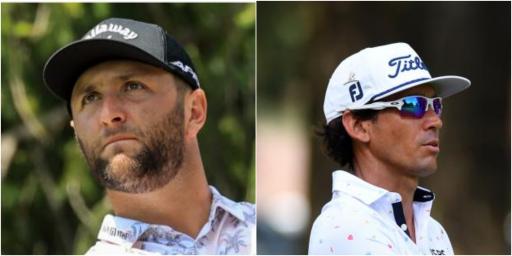 Jon Rahm has a mountain to climb if he is going to win his home tournament for the third time in a row.

The World No. 1 is six shots behind leader and fellow Spaniard Rafael Cabrera-Bello at the Acciona Open de España through 54 holes.

Rahm cantered to victory in 2018 and 2019 but looked visibly frustrated on Saturday in front of his home fans.

His first two rounds of 63 and 67 put himself well into contention but a third round of 72 (1-over) leaves him needing a Sunday charge.

Rahm was just a little bit off all day as his wedges were just a fraction short and his putting uncharacteristically let him down.

The 26-year old made a bogey at three before making a double at the fifth hole.

He recovered with two birdies to make the turn at 1-over but his struggles continued on the back nine with back-to-back bogeys at 11 and 12.

He closed out the day with a birdie after nearly driving the green at 18 but will need to go very low to really challenge Cabrera-Bello.

His third round score marks the first time he has ever carded anything other than in the 60s in his home championship.

Cabrera-Bello sits top of the leaderboard at 17-under after he signed for a sublime 64 (7-under) after opening rounds of 67 and 65.

"I was getting goosebumps on every hole," the clubhouse leader told Sky Sports afterwards.

It would be by far in a way the most significant victory of the 37-year-old, who has won three times on the European Tour.

He has held the 54-hole lead six times before in European Tour events but has never managed to close out victory.

Cabrera-Bello has only converted a 54-hole lead once on the Challenge Tour.

The hugely popular Spaniard made seven birdies during his third round on the par 71 course at the Club de Campo Villa de Madrid.

In the chasing pack are Frenchman Julien Guerrier and fellow Spaniard Adri Arnaus at 15-under.

English duo Jack Senior (14-under) and Richard Bland (12-under) continue their fine form going into the final round.

They both have shot three rounds in the 60s and will need another low round to stop Cabrera-Bello.

european tour
jon rahm
rafa cabrera bello
Spanish Open
Ryder Cup
Previous
'He tried to hit a pony' - Golf fans explain the WORST incidents they've seen
Next
Is the Tiger Woods comeback on? The big cat is BACK on the course with his son

Golf news
Paige Spiranac: How much is the social media sensation worth in 2021?
Golf news
Man buys wife expensive jewellery on eBay but he's sent GOLF CLUBS instead!
Features
Tiger Woods owes us an explanation of what happened behind the wheel | Opinion
Golf news
You can now play The Belfry's ICONIC Brabazon course on Toptracer
Golf news
Lucy Robson GOES AFTER Paige Spiranac on Instagram