World-renowned golf coach Butch Harmon reveals the best way to THROW your golf club in anger on the golf course... 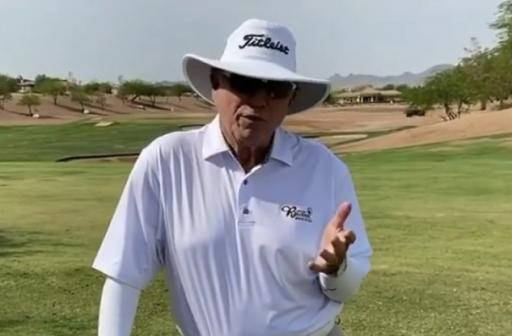 Tiger Woods' former long-time golf coach Butch Harmon has taken to social media to reveal the best way to throw a golf club in frustration when out on the course.

While not something he typically teaches his students, or always encourages, Harmon - who runs his own Golf School - thought he would have a bit of fun on camera when he was out doing some filming recently.

You will most definitely want to wait until the end of the video!

"For those of you who are temperamental and like to throw clubs, I'm not saying I agree with it or don't agree with it because I've thrown a few, but there's an art to it," said Harmon, during a recent shoot with Golf Digest.

"Number one, never throw the club sideways or backwards because you have to go and get it. Always throw it on the line you are going to walk on.

"Then the technique is important. You want to have a nice wind up and a nice move through the ball. The madder you are the more adrenaline you have, the further you will throw it.

"This will probably only go about 50 yards, but here's the technique... good wind up, move into it and always underhand.... woooooo!""

NEXT PAGE: GOLF FANS REACT AS TOM BRADY HOLES THREE MONSTER PUTTS IN A ROW AHEAD OF THE MATCH