The feud developed at the US Open when Bryson DeChambeau appeared to deliberately photobomb one of Brooks Koepka's interviews at Torrey Pines. 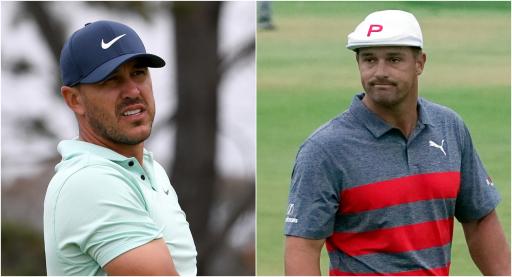 Brooks Koepka has revealed that Bryson DeChambeau "went back on his word" from a conversation that the pair supposedly had at the Northern Trust in 2019.

During this tournament, Koepka criticised some golfers for slow play and in the same week, DeChambeau had been criticised by some golf fans for his pace of play.

WATCH: BROOKS QUESTIONS A GOLF FAN WHO ONLY STUCK $100 ON HIM TO WIN!

After the four-time major winner expressed his views, DeChambeau approached Koepka's caddie, Ricky Elliott, as he felt the comments were clearly aimed at him.

Before their final rounds, the pair cleared the air with a conversation but now two years later, Koepka feels that his verbal sparring partner has since broken an alleged agreement that they had made.

"I thought it was just interesting when he walked up to my caddie and told Ricky (Elliott) that if I had something to say, to say it to his face," Koepka said, speaking ahead of the 2021 Travelers Championship.

"I thought that was kind of odd, when you don't walk up to my face, and say it to my caddie.

"And when we had that conversation, we agreed on something and he went back on it. So, if you're gonna go back on your word, I don't have much respect for that."

It is fair to say that both players have not hidden from giving their opinions of each other in recent weeks. It is a spat that has both entertained and intrigued golf fans, players and experts.

The tension caught fire at the PGA Championship last month when Koepka rolled his eyes during an interview, after being agitated by the noise  DeChambeau made while walking behind him at Kiawah Island.

Since then, the pair have exchanged words on Twitter and given their opinions on the matter. Koepka has previously said that this type of rivalry can help grow the game of golf, while DeChambeau has expressed his enjoyment of the feud.

NEXT PAGE: NEW WORLD NO. 1 JON RAHM CREDITS TWO OTHER MAJOR CHAMPIONS AFTER US OPEN WIN