Will Tiger Woods make The Masters? New video would appear to give Tiger fans hope of a return to Augusta National. 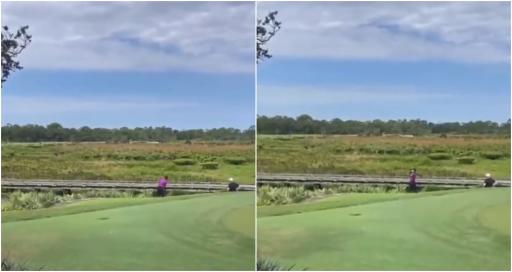 A video of Tiger Woods hitting a drive at Medalist Golf Club on Saturday was shared on social media on Sunday evening.

According to the popular @TWLegion account on Twitter, Woods has this week been walking the golf course at Medalist back home in Florida. It is understood that Woods' caddie Joe LaCava has also been out there with him.

The @TWLegion account claims "a bunch of college kids" were out practising at Medalist GC on Saturday afternoon and that it looked like "somebody took an unauthorised video" of Woods hitting a drive.

From the video we caught on social media earlier today, someone had taken a video of Woods from quite far away, almost like they were hiding in the bushes as to not be caught.

The video of Woods hitting a drive, coupled with reports that he has been walking Medalist GC with his caddie LaCava, are certainly positive signs for Tiger fans hoping to see him make his return to competitive golf at The Masters in two weeks' time.

Here’s the Tiger Woods video that was deleted pic.twitter.com/zfi4LOn7U2

There were a bunch of college kids out practicing at Medalist yesterday and looks like somebody took an unauthorized video of him hitting a drive at Medalist. Was posted by Ziregolf on IG. Obviously not allowed at the club but re shared the original post on my IG story

Sky Sports Golf's lead commentator Ewen Murray seemed particularly confident that we could see Woods at The Masters during the broadcast of the final round of the WGC Match Play.

"I've got a feeling we might be seeing him in two weeks," said Murray.

PGA Tour caddie Kip Henley tweeted earlier today: "Ain’t no way in hell Tiger Woods doesn’t at least start the first round of the Masters next week ! Me laughing at the naysayers will be sooner than I thought!"

Woods played in the PNC Championship with his son Charlie Woods at the end of 2021 but that was an unofficial PGA Tour event - and he was also able to ride in his golf cart during that tournament.

The 15-time major champion went on to finish second with Charlie that week.

Woods' last start on the PGA Tour was at The Masters in November 2020. He finished tied 38th that week.

The former World No.1 is currently ranked 917th in the Official World Golf Rankings.

Woods memorably won his last major title at the 2019 Masters, marking the fifth time he had slipped on the famous Green Jacket.