Scottie Scheffler won the WGC Match Play for his third win in five starts to topple Jon Rahm as the best golfer on the planet. 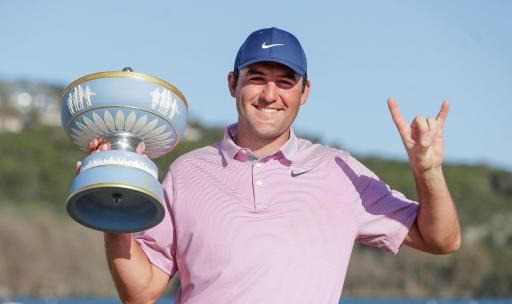 An emotional Scottie Scheffler says he "never made it this far in my dreams" as he became the new World No. 1.

Scheffler toppled Jon Rahm as the world's best golfer after a dominant performance over Kevin Kisner in the final of the WGC Match Play.

Last year he was the runner up in this competition to Billy Horschel but he avenged that defeat and took Rahm's spot in the process.

Rahm had spent 36 weeks as the best player on the planet but Scheffler has been vying for his status for a while now.

With the win, he earned $2.1million and stretches his lead atop of the FedEx Cup points race.

Scheffler broke down in tears by the green and said: "I'll see it when I believe it on the world rankings tomorrow to be honest with you.

"I never really got that far in my dreams. You know...I never made it that far. I just love playing golf. I just love competing."

He broke through with his first PGA Tour victory at the WM Phoenix Open in February with a playoff win over Patrick Cantlay.

A month later he won the Arnold Palmer Invitational with a one stroke victory over Tyrrell Hatton, Viktor Hovland and Horschel.

Scheffler was visibly emotional when he claimed the victory over Kisner and was hugged by his wife Meredith greenside.

He made minced meat of Rahm at the Ryder Cup to prove his match play credentials with a stunning 4&3 victory in the Sunday singles last September at Whistling Straits.

In the round of 16 here Scheffler managed to get a bit of sweet revenge over Horschel with a 1UP victory.

Then he took care of Ireland's Seamus Power in the round of eight before defeating Dustin Johnson in the semi final.

In the group stages, Scheffler was beaten by Tommy Fleetwood but he won against Ian Poulter. He also beat Matthew Fitzpatrick in an epic playoff.

Scheffler has been looking like a candidate for being the best player in the world for a while now.