Woods thanked the players for the "touching" tribute, but it seems to have caused a widespread debate on social media. 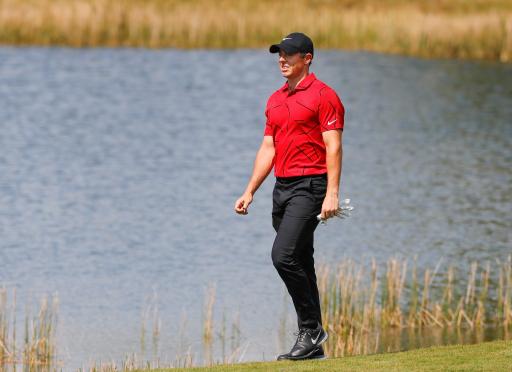 Some of the biggest names in golf paid tribute to Tiger Woods on Sunday by wearing his iconic 'Sunday Red' for the final round of the WGC-Workday Championship, but it seems to have caused a serious debate between golf fans on social media.

With Woods still recovering from his recent car crash and surgery, many of Nike Golf's biggest stars, such as Rory McIlroy, Tommy Fleetwood, Scottie Scheffler and Tony Finau, all wore the black and red combination that Woods made famous.

Players sponsored by other brands weren't involved in the tribute, although I'm sure they would have liked to have been, with adidas Golf star Collin Morikawa a huge fan of Woods and thanked the Big Cat following his three-stroke victory at The Concession.

Max Homa, who recently won the Genesis Invitational, received an onslaught of abuse from golf fans who shamed him for not joining the tribute, although he explained he is under contract to wear certain outfits.

The 15-time major champion sent out a tweet on Sunday, saying that he thought the tribute was "touching" and thanked all the players and fans around the world for helping him through a "tough" time.

For some reason, the tribute seemed to touch a nerve with a few golf fans, with some people labelling it "ridiculous" simply due to the fact that Woods isn't critically ill following the crash, while others believed it was a respectful gesture to the greatest golfer of all time.

"Cynical world these days. Can't even have a nice gesture without a lot of d*cks questioning it because "Tiger's not critically ill" or dismissing it based on "bigger issues in the world". Things can be mutually exclusive and the world is not binary," read one of the comments on Twitter, after the PGA Tour posted clips and images of some of the tributes on Sunday.

On the other end of the spectrum, one golf fan said: "Why he ain't dead. He will recover. This is ridiculous. Send the man a card. He ain't God. He just a regular guy that plays golf."

Check out some of the other reactions to the tribute below.

Imagine being a professional in an individual sport and having a scripted, color coordinated collared shirt contract . Just seems so stoopid and anti-individual. Props to the golfers who didn’t pigeon hole themselves for a few shekels

You’re all acting like he’s dead. The abuse to Homa for not wearing red is absolutely disgusting too. It’s a nice gesture but this is so overblown our of proportion.

What you're forgetting is tiger would've been the inspiration to start playing golf for a lot of these guys. They're not "making a statement", they're paying respect to their hero, and the man who has done a lot for golf, who probably won't play professionally again.

People have to remember, half the young guys on the tour grew up idolizing Tiger. He's the reason many started playing golf, so it's a pretty big deal for them. Nice gesture.

A bit over top all this for Tiger Woods. Awful what happened but he's not dead or critically injured. Embarrassing how some players are getting abuse just for not wearing tribute clothes #WGCWorkdayChampionship #PGATOUR

This just shows how much respect the players have for Tiger! He changed the game, and now he will most likely never play again. Big up to the players who appreciate him for everything he did for game.

Most of the guys out there today grew up idolizing Tiger. Yes, he’s still with us but they are showing their respect for the man who made golf what it is today. This is about showing respect and letting Tiger know that they are with him and thinking about him. I love it.

He broke his legs ffs. He is not dead or seriously injured. Pretty pathetic tbh.