The big cat has been taking a trip down memory lane - and he has been informing his 6.5 million followers on Twitter. 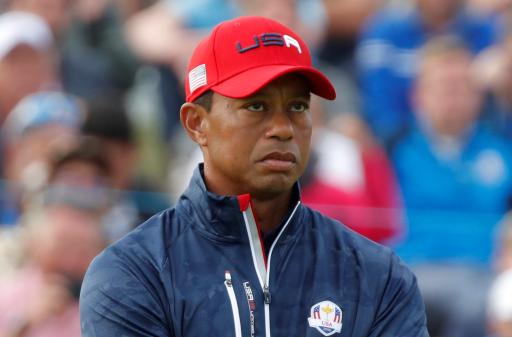 Tiger Woods is keeping busy off the course as he continues his rehabilitation after turning over his car.

Even though he's not on the course, the big cat is on the hunt for trophies ahead of the next World Golf Hall of Fame induction ceremony.

The ceremony was postponed because of Covid-19 but will now take place on March 9 during the Players Championship.

Woods burst onto the scene 25 years ago and won twice in his first full season on the PGA Tour, seeing him named Rookie of the Year.

He shared an image of the trophy on Twitter, telling his 6.5 million followers he was trying to hunt for some of his favourites.

I was trophy hunting trying to pick out some favorites for my Hall of Fame exhibit and found this guy. Excited to see it all come together soon. pic.twitter.com/MNPK7Q7iTt

He'll have a tough time picking out his best ones as he has 82 wins on the PGA Tour and 15 majors.

During his first memorable season (who can forget that straw hat?) he took down the Las Vegas Invitational after beating Davis Love III in a playoff.

RELATED: BUBBA WATSON SPLITS WITH HIS CADDIE AFTER 15 YEARS

He followed that victory with another win two weeks later, beating Payne Stewart at the Disney World/Oldsmobile Classic.

Although he is not playing at the moment, Woods is still very much part of the golf world.

The winning US Ryder Cup side has revealed Woods texted his team mates inspirational messages and support during their dismantling of the European team at Whistling Straits.

Woods reportedly told the team: "Step on their necks".

NEXT PAGE: DECHAMBEAU BLASTS HIS WAY INTO LONG DRIVE FINAL