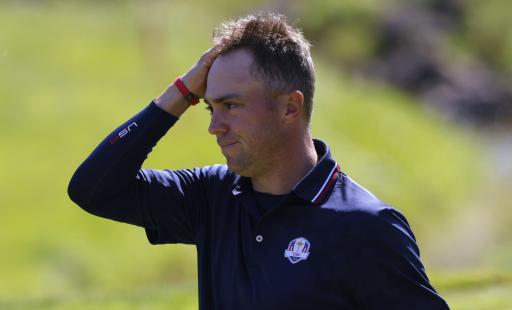 Justin Thomas has confirmed that he did not fire his caddie Jimmy Johnson and it was Johnson's decision to part ways with the World No. 6.

It was announced that Jim "Bones" Mackay, who famously caddied for Phil Mickelson for 25 years, will be Thomas' new caddie for the 2021/2022 PGA Tour season.

Thomas and Johnson had been together since 2015 when he joined the tour and just two years later, he won his first major title at the PGA Championship and the FedEx Cup.

The pair won 14 PGA Tour events as a team, but Thomas has confirmed that Johnson informed him after the Ryder Cup that he wanted to pursue other opportunities.

"Jimmy and I had an incredible run of six years together but we have agreed to go our separate ways," Thomas wrote on Twitter.

"I 100% did not fire him, as Jimmy came to me after the Ryder Cup and told me he has decided to pursue other opportunities.

"I have nothing but respect for Jimmy and his wife Jen and I'll always appreciate all the success and times we had together, I wish him all the best."

The 28-year-old will now enter a new partnership with Mackay, who has been working as an on-course reporter for NBC and Golf Channel since 2017.

The 56-year-old has caddied for Thomas before. In 2018, Johnson suffered an injury so Mackay filled into caddie for Thomas at the Sony Open.

Also in 2020, Mackay carried for Thomas at the WGC-FedEx St. Jude Invitational when he won the tournament by 3 shots. Mackay will still pursue his broadcasting role, but only when the tour schedule allows him to.