The Ryder Cup hero will have a chance to become world champion - and he's taking on Kyle Berkshire. 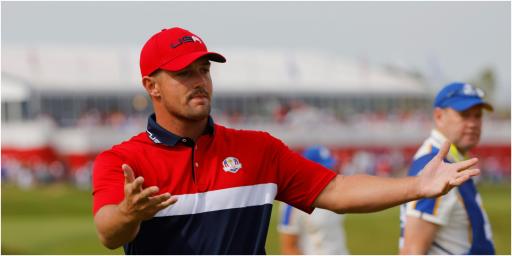 Bryson DeChambeau has advanced to the final 16 of the Pro Long Driver's Association World Championship.

The 28-year-old Ryder Cup hero hit a biggest drive of 359 yards to get through to the championship round.

He will compete alongside former world champion Kyle Berkshire and Justin James, who also made it through.

DeChambeau was in front of a hyped crowd in Mesquite, Nevada as he cranked up huge clubhead and ball speeds.

On the range in the warm up he clocked a ballspeed of 212mph on a day where the wind was directly into their faces.

Bryson getting loose on the range. Seems like the biggest crowd of the week behind us. pic.twitter.com/qqL9FXuLgh

The commentators on the livestream suggested anything over 320 yards would be a good hit.

DeChambeau earlier launched a drive of 412 yards in the first round and another drive of 355 to make it through to the round of 32.

In Mesquite, Nevada, DeChambeau was described as being a tough spot with a very talented group.

Fireworks on the 1st Tee @b_dechambeau drives the green...

In his first set DeChambeau missed the grid on his first three balls.

But he recovered to take the win in his first set smashing one 358.

So far DeChambeau has comfortably qualified on each day and has been described as having a real chance of winning.

A real advantage for DeChambeau has been his accuracy in finding the grid on multiple occasions.

DeChambeau finished third in the second set with his longest drive of 338.

In his third set he tied for second with a drive of 359 as the leaderboard was logjammed.

He was in a tie for sixth after three sets with the top eight going through.

He needed to hit the ball down the right hand side of the grid to get some runout but kept missing left.

DeChambeau qualified for the round of 16 with a set to spare.

He took his fourth set with a drive of 333 yards, clocking a clubhead speed of 144mph.

He let out a roar on his final drive and tipped his hat to the crowd.

There will likely be even more tuning in to the Championship Round tomorrow.

NEXT PAGE: BONES TO RETURN AS A CADDY FULL TIME FOR JT