Tom Kim (-6) and Si Woo Kim (-7), stars of the Presidents Cup for the International team, thrilled fans again in the first round of the Shriners Children's Open. 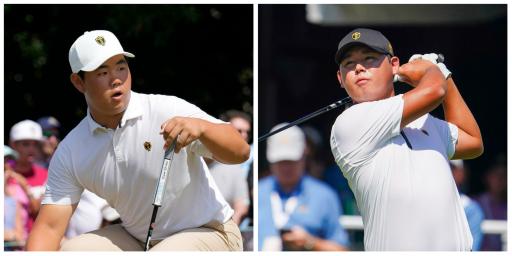 Tom Kim and Si Woo Kim are back on the PGA Tour this week and their exciting form did not wilt in the first round of the Shriners Children's Open.

Tom Kim, who has emerged as one of the biggest personalities in the game since the Presidents Cup, shot a bogey-free score of 65 on Thursday at TPC Summerlin.

This was Kim's first round on the PGA Tour since coming tied 54th at the BMW Championship. He earned his place in the FedEx Cup Playoffs with his maiden win on Tour at last season's Wyndham Championship.

"I feel like nothing has really changed, but a lot of people have been like telling me that 'hey, you're such a star now', things like that, but I feel like really, am I that big of a star?" Kim said on Wednesday ahead of the tournament.

"I played the Presidents Cup, it's great, I had one win. But you've got guys like Justin Thomas, Jordan Spieth and those guys. I've still got a lot to do. But it's amazing how people are starting to recognize me, and it's a great feeling, and I really appreciate it. It's been fun."

In the fourth session of the Presidents Cup, Kim rolled in a fantastic putt to win the match for him and Si Woo Kim against the formidable pair of Xander Schauffele and Patrick Cantlay.

Si Woo Kim also beat Justin Thomas in the top match of the Sunday singles and he has taken his immense confidence into this week at what is also his first appearance of the 2022/2023 season.

The former Players Championship winner made eight birdies and one bogey on his way to a 64 in Nevada. Kim only made one top-10 in 29 events on Tour last season.

Another player looking for some inspiration on the circuit is Jason Day. The Australian was further than ever before from qualifying for Trevor Immelman's Cup team in 2022, but he started strongly on Thursday with a 5-under-par 66 of his own.

Fortinet Championship winner Max Homa opened with a 64, while Rickie Fowler carded another tame score of 70.