Tom Kim holed a crucial putt on Saturday evening to secure an important point for the International team who are looking to upset the odds at Quail Hollow. 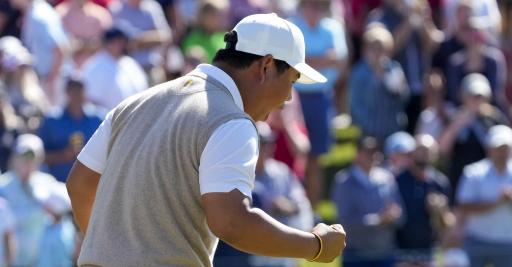 Tom Kim has encapsulated the passion and the spirit that was needed to keep the International team in a competitive state at this year's Presidents Cup.

Trevor Immelman's side won the Saturday four-ball session 3-1 having drawn the morning foursomes session 2-2. Kim was in inspired form on day two, picking up maximum points alongside K.H. Lee and Si Woo Kim.

With Lee, the back-to-back winner of the AT&T Byron Nelson, the pair made four birdies and an eagle against Scottie Scheffler and Sam Burns. An extremely impressive scorecard for foursomes indeed.

The 20-year-old then made four birdies and an eagle as an individual in the second four-ball session of the week. His pulsating celebration after rolling in the winning putt on 18 to beat Patrick Cantlay and Xander Schauffele 1 up will live long in the memory.

"I was looking over that putt, and I wanted it more than anything in the world. I would have done anything for that to go in," Kim said after a dramatic day in North Carolina.

Things looked extremely bleak for Kim and the Internationals after the USA led 8-2 on Friday evening with Max Homa also providing some heart-pumping antics on the final green.

But much like many European Ryder Cup sides from down the years, the International team rode a wave of courage and bravery to battle back, giving themselves a chance of a huge sporting upset in the Sunday singles.

11-7 is a healthy score for Davis Love III's team for sure, but he will be the first to tell you that a four-point deficit is never safe. He captained America at the 2012 Ryder Cup at Medinah.

Kim, who won the Wyndham Championship back in August, will tee it up against Homa later today, a match that could certainly produce more fireworks and tension.

Golf fans on social media have loved Kim's performance. On his Presidents Cup debut, missing the likes of Cameron Smith, Louis Oosthuizen and Joaquin Niemann for moving to LIV Golf, he could be at the heart of a very special afternoon on September 25.

Si Woo Kim running after Tom Kim to celebrate will be my enduring memory of today pic.twitter.com/BVtAJjwWzG

Give us alllllll the Tom Kim.