Finau in contention to win his second PGA Tour title with one round to go at The American Express... 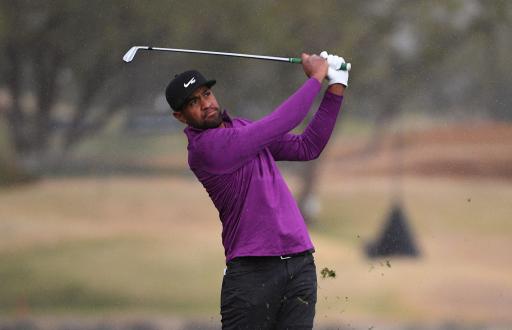 Tony Finau has given himself every chance of winning just his second career PGA Tour title after moving into a tie for the 54-hole lead at The American Express.

Finau, 31, carded a 5-under 67 to move to 15-under par alongside Si Woo Kim and Max Homa with 18 holes to play at the Stadium Course in La Quinta, California.

Double.
Birdie.
Birdie. @TonyFinauGolf has bounced back and is 1 off the lead. pic.twitter.com/mLNTu7MHpY

The big-hitting American has incredibly posted 34 top-10 finishes since landing his maiden PGA Tour title back in March 2016 at the Puerto Rico Open, which he won in a playoff over Steve Marino.

Finau looked to have squandered his chances of being in contention heading into Sunday when finding the water with his tee shot at the tricky par-3 13th, but he bounced back superbly with three consecutive birdies to pull himself back to the top of the leaderboard.

Richy Werenski lies a further stroke behind the trio on 14-under par, while Russell Knox, Brian Harman and Emiliano Grillo find themselves two off the pace on 13-under par.

Francesco Molinari is showing signs of returning to his best after a dismal 2020 campaign, with the Italian progressing nicely to 12-under par alongside Cameron Davis, Rory Sabbatini, Doug Ghim and Chase Seiffert.

Seven players are on 11-under including pre-tournament favourite Patrick Cantlay.