Jack Cantin is being tipped as the "next Tiger Woods" - and he has even given Bryson DeChambeau a lesson in how to shout 'FORE!' 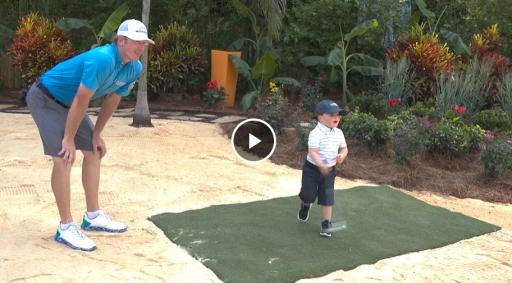 When the Wyndham Championship and Wyndham Rewards event organizers came across little Jack Cantin, an adorable three-year old golf phenom from Canada, they wanted to make him feel like one of the pros and extended a VIP invite for him and his family.

And it's fair to say he certainly showed him up with his epic golf swing (and cute fist bumps).

Jack hits a number of balls under the guidance of Sneds, and Jack then tells him how he wants to one day become a PGA Tour pro.

The little man even gave Bryson DeChambeau a lesson in how to shout 'FORE!' and also gave Sneds a tip for him to take into this week's Wyndham Championship.

WATCH THE VIDEO BELOW FOR MORE

"A better golf swing than me."

US sportscaster Scott Van Pelt has called Jack "the next Tiger Woods" after claiming the title of World’s Best Peewee Golf Swing in 2020.

"This morning was one of the most amazing experiences of our lives," said Jack's father Eric Cantin.

"The smile that lit up Jack's face when he met Brandt, was something I will remember for the rest of my life."

NOW WATCH: THE MOST BRUTAL LIP-OUT FOR A HOLE-IN-ONE WE HAVE EVER SEEN!