WATCH: Jason Dufner SMASHES his putter against the flag at Wyndham Championship 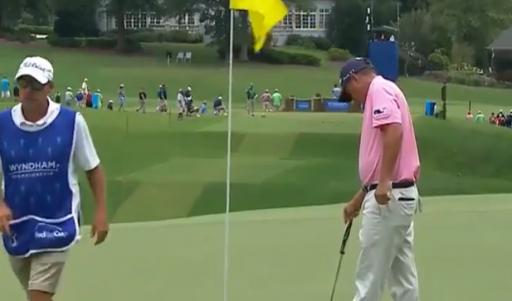 There was once a time when Jason Dufner was considered one of the most laidback golfers not just on the PGA Tour, but the planet. Let's just hold that thought while watching the following video!

A clip has appeared on Skratch's social media this week of Dufner once missing a putt during the Wyndham Championship, only to blame some spike marks before rattling the flagstick with his putter.

DEBATE: MATT WALLACE LAUNCHES HIS CLUB INTO THE TURF AGAIN - IS IT TIME TO DOCK SHOTS FOR PLAYER STROPS?

It’s #friday13th and Jason is *WREAKING HAVOC* on the golf course. pic.twitter.com/rdFxk6ToIY

As things stand today, the 2013 US PGA champion is well outside the top 125 in the FedEx Cup standings and he will be ineligible to compete in next week's FedEx Cup Playoffs that commence at the Northern Trust.

on brand to say the least https://t.co/tR1bDN5i8R

"Should have just javelin tossed the flag."

"Not a big deal. Probably the absolute most emotion he has ever displayed on a golf course. Anybody who has played competitive golf understands this."

"Oh of course it was the spike marks, which you can tap down before you take a putt. Got to love some of their reactions when they miss a putt these days!"

"Duff needs to throw a hammer in and he'll chill out."

"Dude needs to hit the gym."

"Who dressed that guy?"