WATCH: The MOST BRUTAL lip out for a hole-in-one on the PGA Tour!

Austin Cook with the most outrageous horseshoe for a hole-in-one you will ever see - how would you react if THIS happened to you?! 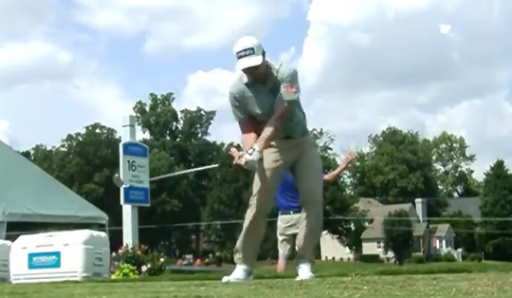 Austin Cook needs as many things as possible to go his way at the Wyndham Championship as he sits just outside the top 125 to progress to next week's FedEx Cup Playoffs.

While a tap-in birdie at the 16th certainly helped matters for the American, things could have been so much better as the ball did a full 360-degree turn around the cup.

"That's as bad of a horseshoe as I've ever seen," said the PGA Tour commentator.

WATCH THE BRUTAL LIP-OUT FOR AN ACE BELOW:

"Go to your home ball," wrote Kevin Na on the PGA Tour's video.

"I told you it touched the hole bro," wrote Dylan Frittelli, who was playing alongside Cook.

Cook sadly went on to card a round of level-par which leaves him well off the pace heading into the second round, and he is currently projected to finish outside the top 130 in the standings, leaving him short of competing in the Playoffs next week.

He will likely need a top-15 finish or better in order to proceed.

Here's how other golf fans reacted:

"Pushed it, was right from the start."

"This happened to me once, but it was a 2 footer for bogey."

"I would still 3 putt that for bogey."

"I would be raging so much."

"Unreal shot but that is just mean."

REVEALED: THE AVERAGE PGA TOUR CARRY DISTANCES IN 2021 - HOW DO YOUR NUMBERS STACK UP AGAINST THE WORLD'S BEST?