WATCH: Bubba Watson CLATTERS spectator as ball nearly goes in for an ALBATROSS!

Jason Day and Marc Leishman get off to fast start at the QBE Shootout with incredible round of 56. 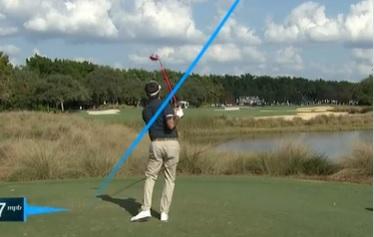 Bubba Watson received one of the most fortunate bounces of the PGA Tour season when his drive clattered off a spectator's arm and very nearly went in the hole for an albatross on the par-4 13th on day one of the QBE Shootout in Florida.

Watson, playing with LPGA Tour star Lexi Thompson in the annual two-player team event, launched his drive over the back of the green on the short par-4 hole but his ball flew straight onto the arm of a golf fan wearing a Buffalo Bills T-shirt and a pair of shorts.

The ball, which left a nasty bruise on the man's arm, then rolled all the way down the green to some five feet from the cup.

Any shouts of FORE? Nope.

As Watson approached the green, he did at least walk over to the fan and sign him a glove.

Thompson missed the eagle putt, but with the format being Texas Scramble on day one, it meant Watson had another chance for the team and he duly holed it for an eagle-two.

Watson and Thompson went on to shoot a very respectable round of 13-under par in the scramble format.

Australian duo Marc Leishman and Jason Day set the early pace with a blistering round of 16-under 56.

Leishman chipped in for eagle twice during the round.

They fell one shot off the lowest-ever QBE Shootout scramble round which stands at 17-under 55, achieved by five pairings down the years.

Corey Conners and Graeme McDowell and defending champions Harris English and Matt Kuchar are hot on their heels following equally impressive rounds of 15-under 57.

Another eagle hole-out for @MarcLeish.

All 12 teams in the tournament kept themselves somewhat in the hunt for the title with just five shots separating first to last.

The last time all teams shot 10-under par and better on day one of the QBE Shootout was back in 2014.

NEXT PAGE: COULD BRYSON DECHAMBEAU'S DRIVING RANGE REVELATION TAKE HIM TO THE NEXT LEVEL?