Kevin Na: Instead of walking one in, he opts for a LUNGE at the QBE Shootout

Have we got a new style developing from the good-humoured American? 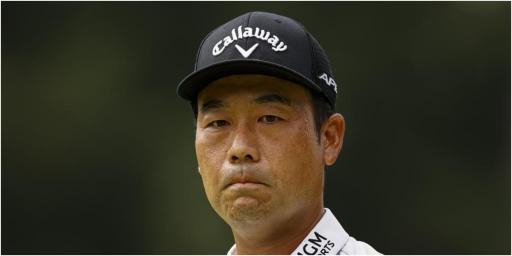 Kevin Na has become the man on the PGA Tour who walks in his putts.

How many times have you been playing with your pals and you drain one and someone chimes in: "Walked it in like Kevin Na!"

Perhaps Na's most famous moment of this came when he laughed and joked with Tiger Woods about it at the Players Championship.

On the 17th green at TPC Sawgrass, Na famously walked in a shot putt in emphatic style.

Woods' response was to do exactly the same thing, bursting into laughter and high-fiving the American.

It was something we have never really seen from Woods, as before his injuries he cut a stoic and serious figure on the golf course.

Na, 38, is playing the QBE Shootout this week where he was faced with a short putt.

This time, instead of walking one in he opts for something a little different. He goes for a lunge.

Then he gives us all a big smile. Classic Na.

Na is partnering Jason Kokrak this week in Naples, Florida, and are currently three strokes behind the leaders.

Marc Leishman and Jason Day are the early pace setters.

Equipment news
New Shot Scope user dashboard to help golfers improve by managing their data
US PGA
Rory McIlroy DECLINES all media requests as he storms out of PGA Championship
US PGA
US PGA: Here's how much Justin Thomas and others won at the PGA Championship
Equipment
The BEST PUMA golf polo shirts as seen on the PGA Tour!
US PGA
PGA Tour pro SLAMS Southern Hills as US PGA conditions prove difficult