Only Hideki Matsuyama would do this on the PGA Tour! 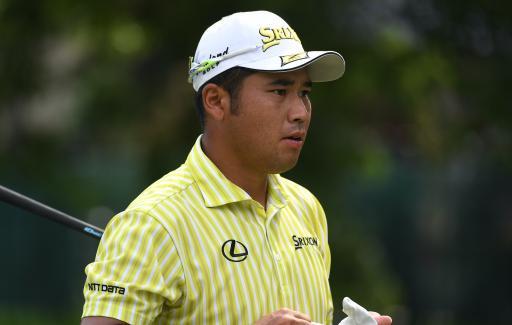 Hideki Matsuyama got off to a solid start on day one of the Sony Open on the PGA Tour, and his round was highlighted by an epic one-handed shot into the par-4 16th.

Starting on the 10th hole, the reigning Masters champion birdied the par-3 11th with a 25-footer to get into red numbers and he then added another birdie at the 16th when doing what he does best in terms of a reaction.

If you are none the wiser, Matsuyama typically loves to hit shots where he looks so disinterested in the flight.

Sometimes you think he's sent one OB or shanked it off the planet, but nope, more often than not it ends up on the dancefloor.

NEWS: TOUR PRO WITHDRAWS FROM AUSTRALIAN PGA AFTER SLICING HIS HAND WHEN MOVING A STAKE

That's exactly what happened for the Japanese star at 16 as he took dead aim with a pitching wedge from 155 yards.

Matsuyama hit the ball with a one-handed follow through, and yup you guessed it, the ball ended up 11 feet away.

"Perfectionism at its finest from Hideki Matsuyama," tweeted one golf fan.

He then drilled the putt for birdie before adding another from similar distance at the par-5 18th as he hit the turn in 3-under par.

WATCH MATSUYAMA'S HILARIOUS REACTION TO HIS SHOT BELOW