WATCH: If the PGA Tour broadcasted average golfers | THIS IS HILARIOUS! 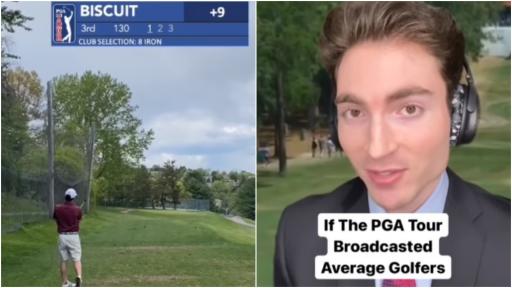 If the PGA Tour coverage on CBS Sports featured averaged golfers on average golf courses, then it would probably go something a little like this mock video presented by @thatsmyboyjacob on Instagram.

The hilarious Instagram Reel from Jacob, who lives in Chicago, has instantly gone viral as it's about as relatable as it comes for us amateur hacks dreaming of one day competing on the PGA Tour.

"Alright, welcome back to CBS Sports presentation of the Caldwell Championship, we're here live at the beautiful... beautiful is a strong word, it's ranked the 46th best public golf course in North Carolina so it's no Augusta," says Jacob to start the video, dressed like Jim Nantz in the commentary box.

"There are beer cans scattered everywhere. Anyway, let's head over to the third to see Britain's Linden Biscuit's shot at the short par 3."

Jacob hands it over to his on-course commentator who is following Biscuit's every move after a very slow start of 9-over par thru the first two holes.

WATCH: THIS IS EXACTLY WHAT IT'S LIKE WHEN A SERIOUS GOLFER GOES ON A TOPGOLF FIRST DATE!

Unfortunately things didn't go much better for him at the 3rd as he goes OB.

The coverage then switches over to Danny Calamari on the 9th, but he then hits a car.

Then we go to the leaderboard to see just how tough everyone has found the conditions.

Comedy gold. Great work, Jacob. We want a series of these!

NOW WATCH: HANG ON A SEC, IS THIS GOLFER HAVING US ON HERE?!

PGA tour
paige spiranac
lucy robson
Tiger Woods
American golf
Previous
Lucy Robson on the benefits of using a Blue Tees Golf Series 3 Max laser
Next
WATCH: This is EXACTLY what it's like when going on a "FUN" date to Topgolf