WATCH: Jordan Spieth makes BACK-TO-BACK HOLE-OUT EAGLES in round of 62!

Jordan Spieth holes out for eagle twice in a row on day two at the Northern Trust on the PGA Tour. 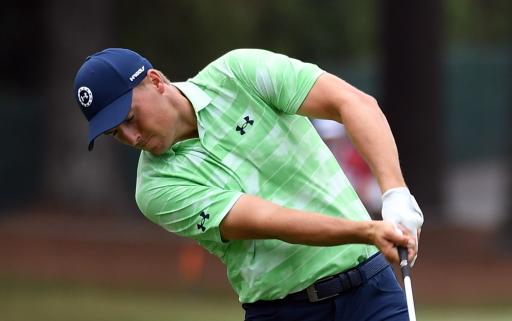 Jordan Spieth produced fireworks on day two at the Northern Trust by making back-to-back hole-out eagles on the 5th and 6th holes en route to tying the course record of 9-under 62 at Liberty Natonal.

Spieth started the round on 1-over par and soon fell to 2-over par after making bogey at the par-4 1st.

The three-time major champion then birdied the par-4 3rd to pull back to level-par for the round before the magic happened on the par-4 5th.

Spieth nailed a drive 327 yards down the middle and then spun a wedge behind the flag and into the cup for an incredible eagle-two.

It'd be more surprising if @JordanSpieth ' hole-out every week. pic.twitter.com/79RlJDAFnS

The former World No.1 then fired an errant tee shot down the par-5 6th before narrowly clearing the water by inches with his second shot.

With his ball lying on the red line of the penalty area, Spieth stepped in to play the shot and holed out for yet another eagle.

It's just getting ridiculous now. pic.twitter.com/IyLemB21kc

Spieth then drove into the bunker on the par-4 7th hole and was forced to lay-up 90 yards short of the green.

He went pin-seeking yet again, this time sending in a wedge to three feet to save par.

Landed this one a whole 3 feet away.@JordanSpieth has cooled off. pic.twitter.com/kT8cMHeOi9

Spieth then added five more birdies thereafter at the 8th, 10th, 13th, 14th and 16th to move to 8-under par for the tournament and four shots off the pace set by Jon Rahm on 12-under par.

His round of 9-under 62 ties the course record at Liberty National, which was also matched on Friday by compatriot and Olympic champion Xander Schauffele, who progressed serenely to 10-under par and just two shots behind Rahm.

NEXT PAGE: JORDAN SPIETH NEARLY WIPES OUT BROOKS KOEPKA AT THE NORTHERN TRUST