WATCH: Matt Fitzpatrick makes HOLE-IN-ONE at Phoenix Open but is LIVID about it 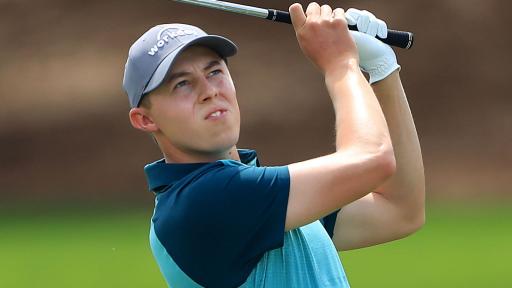 Matt Fitzpatrick recorded a hole-in-one at this week's Phoenix Open at famed TPC Scottsdale, but the only downside was that it came during his Tuesday practice round.

Fitzpatrick, 27, made his ace with a 6-iron on the par-3 12th hole and he then took to social media to reveal his "wasted" effort.

Hole in one, wasted!! pic.twitter.com/Btcrc4fpRx

"Tuesday practice, Waste Mangement, 12th hole, 6-iron, no idea on the yardage," said Fitzpatrick during his video that he posted to social media.

Most mundane hole in one celebration lol

We’ve got to go to @chambleebrandel for a ruling. Is this a legit hole-in-one or have the rules been bifurcated. Is bifurcation becoming a thing now, or no?

“Wasted” , I see what you did there

U Gotta School Me Here...cause your lack of enthusiasm is 'wasted' on me. Did it truly NOT COUNT since it's not a formal round or playing from a set tee marker. Or perhaps if it does count your bar tab @WMPhoenixOpen would be massive! #Ace #Wasted

Nice hole out. You don't sound very happy about it though.

The Englishman has won seven times on the DP World Tour with his last victory coming back in October 2021 at the Andalucia Masters.

Fitzpatrick, who has Lee Westwood and Seve Ballesteros' former caddie Billy Foster on the bag, has been knocking on the door for his maiden PGA Tour in recent years but has not been able to crawl over the line.

He will be fancying his chances of going close at this week's Waste Management Phoenix Open though, especially after his encouraging tie for sixth at Pebble Beach last week.

NEXT PAGE: ANTHONY KIM TO MAKE AN UNEXPECTED RETURN TO GOLF?!