WATCH: PGA Tour pro has an absolute MARE on the rocks at American Express 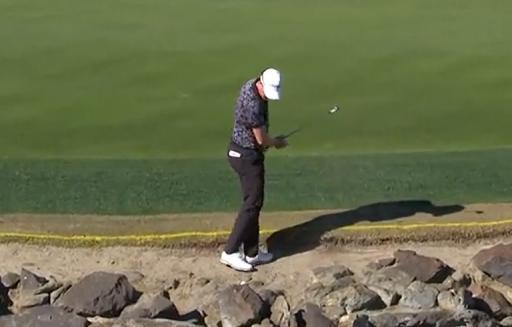 PGA Tour pro Jonas Blixt endured something of a nightmare on the rocks at the par-3 17th during round one of The American Express .

Blixt, who was playing on the tougher Pete Dye Stadium Course in the three-course rota, sent his tee shot over the back of the green and into the rocks at the daunting 165-yard island green par-3 17th.

The Swede got fortunate with his tee shot in the sense his ball bounced back off the rocks giving him a second shot from the penalty area.

Blixt would end up stubbing his second shot as he caught the rock with his club on the backswing, and his ball went backwards into the rocks.

He then tried to hit it again, but his ball once again rolled back into the rocks.

Forced to take an unplayable, Blixt then ended up going back to the drop zone from outside of 100 yards.

He thankfully found the green this time around and two-putted from 20 feet for a quadruple-bogey seven.

WATCH BLIXT'S NIGHTMARE ON THE ROCKS BELOW

The rocks on 17 at PGA West claim their first victim. pic.twitter.com/0ML0LOd9Tj

While not quite as devlish a proposition from the tee as the famous TPC Sawgrass version, also of Pete Dye design, it's not a millon miles away and it's a hole that will no doubt have a huge say in the outcome of the tournament come Sunday evening.

NEXT PAGE: GOLFER SMASHES THE HOTEL WITH HIS TEE SHOT DOWN THE 17TH AT ST ANDREWS!