The Road Hole at St. Andrews is one of the most fearsome on The Open rota and the daunting tee shot certainly does nothing to settle your nerves. 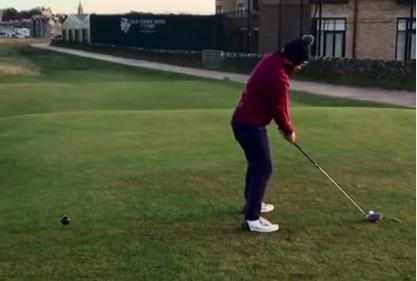 The Open Championship historically returns to St. Andrews this year for the 150th anniversary and it will be a fantastic occasion.

Tiger Woods, Jack Nicklaus and Seve Ballesteros are just a couple of names who have lifted the Claret Jug at the famous venue.

The Old Course poses many challenges and golfers from all walks of life and of all abilities have taken on the notorious links down the years.

Some see St. Andrews as one of the most accessible courses for the PGA Tour professionals with some of the fairways and greens being very large and very inviting.

However, there are many holes that present tough tests and there is arguably no tougher hole than the Road Hole which challenges players from every angle.

The golfer in the footage above learned this the hard way. Teeing it up on the 17th tee box, he looked to be aiming at the building to the right of the hole.

Admittedly, this tee shot does usually require you to cut the corner off to some degree, however, to aim so far right seemed a risk too far.

He hits his drive and after a couple of seconds in the air, the ball rebounds backwards and then sideways in the opposite direction.

Luckily, no damage was done to the windows in the building or any of the players on the tee box. In fact, they saw the funny side of things.

Some golf fans left comments on the video:

"Imagine aiming that way, and expecting a different result," one fan said.

"Hahaha. That is exactly what I did. Still regret trying to hit over the edge of the building," one fan commented.

"I can't stop watching and laughing," another fan said.

"Dude looks like he is aiming straight at the building," another fan commented.

"Road hole means something different way to me," one fan said.