PGA Tour winner Gooch was so close to being struck on the head by a golf ball at the Sony Open. 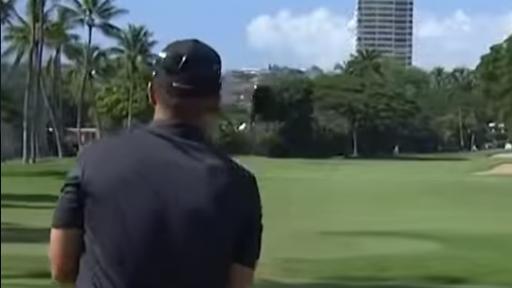 PGA Tour star Talor Gooch was nearly struck on the head by a golf ball as he lined up to strike his opening tee shot down the par-4 1st on day one at the Sony Open.

Commentators had no idea where the golf ball even came from as it whistled past Gooch's head as he stepped up to play his first shot of the round.

"Did that go right between my legs," said Gooch as he backed off his shot and turned to his playing partners Kevin Na and Cameron Smith.

RELATED: KEVIN NA MISSES GOLDEN CHANCES FOR A 59 BUT HE LEADS THE WAY AFTER ROUND ONE AT THE SONY OPEN

Gooch ended up shooting a solid round of 3-under 67 but he lies six shots off the early pace set by defending champion Na, who is playing alongside him for the opening two rounds.

Na had a chance on the closing holes to shoot a magic 59 but he settled for a stunning round of 61.

Smith, who won last week and was the pre-tournament favourite, matched Gooch's round of 67 to remain in the hunt for consecutive victories on the PGA Tour.

Gooch has been enjoying his best ever form on the PGA Tour of late, highlighted by clinching his first title on the main circuit two starts ago when he won by three strokes at the RSM Classic in November 2021.