Bryson DeChambeau on refusing Netflix golf series: "It's too INVASIVE for me"

Bryson DeChambeau reveals why he has declined an invitation to take part in the PGA Tour's new Netflix docuseries. 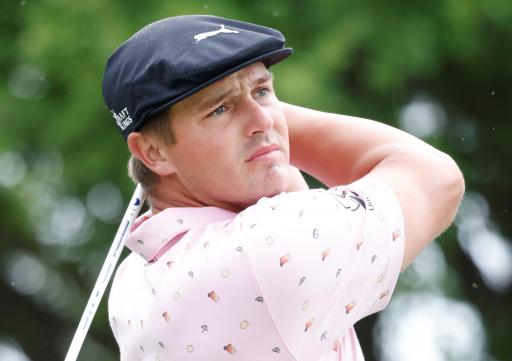 Bryson DeChambeau has refused to take up an invite to participate in the PGA Tour's new Netflix docuseries due to it being "too invasive" for him.

DeChambeau also told reporters that he would "not want to take the light away" from other PGA Tour pros taking part in the series.

The major streaming giant has teamed up with the PGA Tour to film behind the scenes at every major this year as well as the Players Championship and the season-ending FedEx Cup.

It has come about as a result of following in the footsteps of the popular Netflix F1 series 'Drive To Survive'.

DeChambeau's refusal is also a result of him already hosting his own content creation company and YouTube channel, Regecy, as well as his regular posting of his life on and off the course on Instagram to nearly 1 million followers.

"There’s a lot of factors going on in that," DeChambeau told reporters this week.

"One, there wasn’t a deal that was struck that was very well for my side of it. I love Netflix. I watch it. I have a great time with it. But just for me, it wasn’t right at the present moment."

DeChambeau also regularly posts on his Instagram channel, giving his 850,000 followers (and rapidly rising) a glimpse into his life both on and of the course.

Bryson typically posts live videos when out on the range when his fellow long driving buddies.

"They’re getting a pretty dang good look inside my life, and to have more people come in and go even further, which is almost impossible for what I’m giving out, is just too invasive for me," said the 2020 US Open champion.

"I didn’t really want any more than that, because I do have a life outside of it."

Despite not taking part himself, DeChambeau believes the PGA Tour's new Netflix series will be a big success, especially with Harry Higgs in the lineup.

"There’s a lot of great people on there," said the World No.8.

"If I was to go on there, yeah, it would be cool to see, but I feel like there’s a lot more interesting stories.

"You’ve got Harry Higgs. You’ve got numerous others. I don’t want to take the light away from them for their potential to grow themselves in a manner that’s unique to them.

"They have the opportunity to grow a lot more than I do in that regard."

NEXT PAGE: BRYSON DECHAMBEAU ACTUALLY SAID THIS ABOUT THE SAUDI INTERNATIONAL