Golf fans react to Jon Rahm stubbing an 11-inch putt on day one at the Arnold Palmer Invitational. 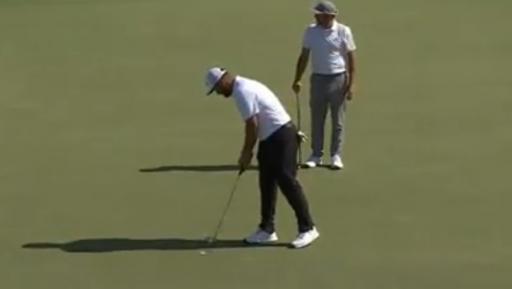 Golfers around the world were able to compare themselves exactly to World No.1 Jon Rahm on Thursday as the Spaniard stubbed an 11-inch putt on the par-3 7th at famed Bay Hill in round one of the Arnold Palmer Invitational.

Rahm sent his birdie putt narrowly past the cup and then trudged over to his ball, being careful to not step on the lines of Sam Burns and Sergio Garcia.

He stepped in with one foot in front of the other, and then stubbed his ball an inch in front of him.

Rahm, who is using a new Odyssey putter this week, tapped in for a bogey-four taking him back to 2-over par for the round and way off the pace currently set by Rory McIlroy on 7-under par.

Jon Rahm misses the WORST PUTT IN THE HISTORY of the PGA Tour!

The more shocking development here is that Rahm calmly walks away without javelining his putter into orbitpic.twitter.com/wIkEzjKaOc

My Wii controller glitched & my college roommate beat me in tiger woods because I missed a 1 foot putt, my long way of telling Jon Rahm we've all been there

I have so much more in common with Jon Rahm than I thought! https://t.co/jWGQMv9jkF

Jon Rahm All of us

never has a world #1 golfer been more relatable than right now…jon rahm two-putting from 10 inches pic.twitter.com/CEv5NYPnYb