Jon Rahm hit one of the worst putts in recent memory on the PGA Tour during his first round of the Arnold Palmer Invitational. 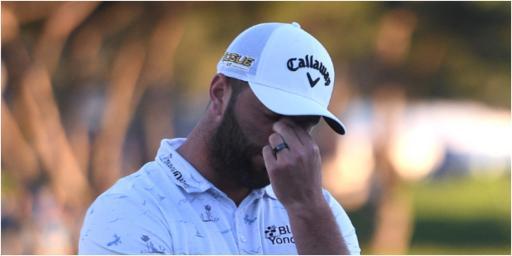 Jon Rahm missed one of the shortest putts in the history of the PGA Tour during his first round of the Arnold Palmer Invitational.

The World No.1 attempted to tap his ball in for a par at the par-3 seventh hole, but even from 11 inches, his putt didn't reach the hole.

The Spaniard must've hit his ball about three inches. It was a truly baffling moment and it led to a needless bogey.

Watch: Corey Conners is ONE OF US as he hits horror fairway wood shot into the water at Bay Hill

In recent weeks, Rahm's putting has been a weakness of his game. He is currently ranked 88th in strokes gained in putting and 82nd in total putting.

It is hard to remember another putt that has been missed in recent memory on any professional golf tour from such a short distance.

Rahm found himself at 2-over par on the outward nine but he recovered coming home to shoot a round of level-par 72.

Despite his struggles with the short stick as of present, Rahm has started the 2021/2022 season well with top-three finishes at the Sony Open and the Farmers Insurance Open.

The six-time PGA Tour winner is making his debut at the Arnold Palmer Invitational this year.

Next Page: Rory McIlroy bursts out the blocks to lead at the Arnold Palmer Invitational