World No.5 Schauffele thinks the popular arm-lock method should be banned on the PGA Tour, but until it is, he is prepared to take advantage of it... 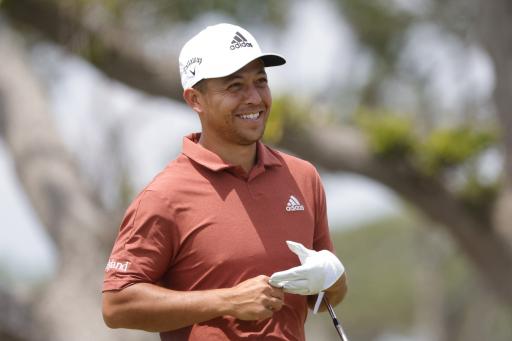 Xander Schauffele switched to the popular arm-lock putting method for the first time in his career on the PGA Tour on day one at the Memorial Tournament, but then told the media it should be banned.

The World No.5 already ranked ninth in strokes-gained putting on the PGA Tour heading into this week's tournament, but he decided to follow a growing trend of players taking full advantage of the arm-lock putting method which sees the putter resting up against the left forearm.

"I am for banning arm-lock puttes, but if everyone else is going to use it and I feel like they have a bigger advantage, I may as well do the same," said Schauffele.

"It's better, it's easier. It's more consistent.

"My coach and I work a lot, Derek Uyeda, in San Diego, we work a lot on start lines and making sure the ball's doing what we think it's doing.

"The fact it's anchored to your arm, you can flinch in your hands, but you can't flinch your entire left arm, so that's the process behind that."

An anchored putting ban came into play back at the start of 2016, which prevented players from anchoring the putter into their stomach, chin and just about every other place on the body.

The only exception was up against the forearm - and that is still the case today.

Other players on the PGA Tour to adopt the arm-lock putting method include Bryson DeChambeau, Webb Simpson, Matt Kuchar and Kevin Kisner.