Brooks Koepka and Bryson DeChambeau fiasco is heating up, and Phil Mickelson could not care any less... 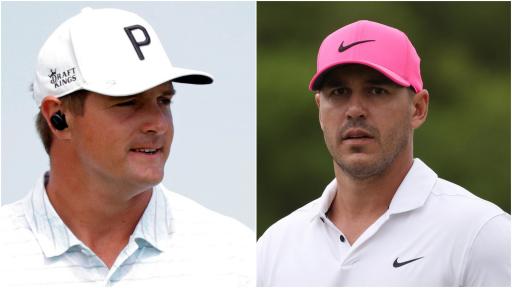 A video of Brooks Koepka and Bryson DeChambeau arguing in the street and holding up traffic has gone viral on social media this week, and it even features Phil Mickelson walking past minding his own business.

WATCH: GOLF FANS REMOVED FROM MEMORIAL AFTER SHOUTING 'BROOKSY' IN BRYSON'S FACE! BROOKS OFFERS TO GIVE THEM FREE BEER!

The hilarious clip, posted by our friends over at ForeTheTour on Instagram, sees DeChambeau and Koepka exchange middle fingers while holding up traffic, and Mickelson strolling past casually on the path with his Callaway backpack.

Some will say it's fake though... WATCH BELOW:

The video follows a number of parody clips featuring Koepka, DeChambeau and Mickelson.

In case you have been living under a rock the past few weeks, Koepka and DeChambeau's dislike for each other appeared to reach new levels at the US PGA Championship at Kiawah Island three weeks ago.

Koepka was being interviewed by Golf Channel but stopped mid-way through as DeChambeau walked past in his metal spikes. Koepka then rolled his eyes and fired an expletive down the camera after DeChambeau muttered a comment under his breath in the direction of Koepka - WATCH HERE

Since that clip on the weekend of golf's second major of the season, DeChambeau and Koepka have traded yet more blows on social media.

Their frosty relationship has seemingly divided golf fans around the world, with some loving every second of it and others questioning its reality.

Others seem to just think their latest spat has come as a direct result of the PGA Tour's new Player Impact Program, which is throwing a ton of money at players engaging most on social media.

Jack Nicklaus, the record 18-time major champion, believes their spat is very much "media driven" but he did compare it to the feud he once had with the late great Arnold Palmer - READ HERE

NEXT PAGE: PHIL MICKELSON HAD THE PERFECT RESPONSE FOR A GOLF FAN WHO CHEEKILY ASKED HIM FOR A NEW CALLAWAY BAG!