I don't think Brooks Koepka surprised anyone when he responded to this controversial question... 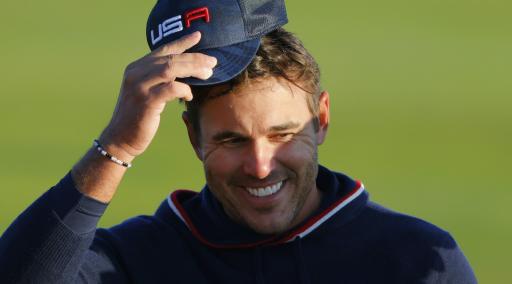 Brooks Koepka and his fiancé Jena Sims were lucky enough to be in attendance at the titanic heavyweight clash between Tyson Fury and Deontay Wilder in Paradise, Nevada last night.

As the pair looked on and watched Fury knock out Wilder in the 11th round, sparking incredible scenes at the T-mobile Arena, Koepka was asked a boxing question of his own.

He was asked to name a PGA Tour player with who he would fight and share a boxing ring. Needless to say, I think we could all guess the inevitable answer.

The four-time major champion kept his cards close to his chest, but you do not have to be a rocket scientist to work out that he meant Bryson DeChambeau.

The pair have gone through a public feud in 2021 but the tensions seem to have calmed down in recent weeks. They shared a hug after Team USA destroyed Team Europe 19-9 at the Ryder Cup.

There was speculation as to how well the US side would perform with these two major champions in the side, but they assured Steve Stricker that there would be no problems.

It all stemmed from when Koepka was visibly annoyed by DeChambeau during an interview at the PGA Championship in May.

The spat has manifested itself in many different ways, such as the duo exchanging words on Twitter and hecklers calling DeChambeau "Brooksy" at PGA Tour events.

It's fair to say that the whole thing may have been blown out of proportion, but the two American golfing heavyweights did not pull any punches when the feud was at its peak.

Maybe a boxing match is not the correct field for them to face off in. But they are set to compete in a 12-hole match on November 26 at the Wynn Golf Course in Las Vegas.