If Sam Burns wins the Shriners Hospitals for Children Open, he would win on the first two starts of his PGA Tour season. 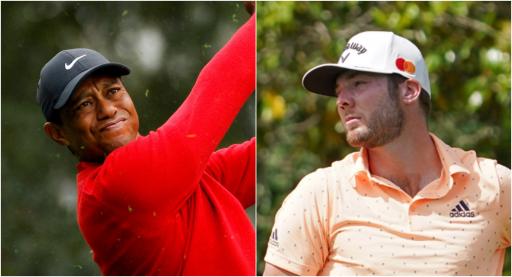 Sam Burns shot a 68 in the third round of the Shriners Hospitals for Children Open to reach 16-under-par for the week, two shots behind leader Adam Schenk.

Burns won the Sanderson Farms Championship last week and if he was to win at TPC Summerlin on Sunday, he would win on his first two appearances of a PGA Tour season.

No player has done this since Tiger Woods in 2008. Woods won the Buick Invitational and the WGC-Accenture Match Play Championship at the start of his campaign 13 years ago.

He also won the Arnold Palmer Invitational and the Dubai Desert Classic on the European Tour. So incredibly, he won his first four starts of that season.

RELATED: IS THE TIGER WOODS COMEBACK ON? THE BIG CAT IS BACK ON THE COURSE WITH HIS SON

Ernie Els, David Duval and Ben Hogan are the only other players to have also won on their first two starts of a PGA Tour season. Now, Burns sits on the brink of joining an exclusive and illustrious club.

Leader @SamBurns66 is showing no signs of slowing down. pic.twitter.com/dW6SBTkR1B

The 25-year-old shot 3-under-par on Saturday in Las Vegas, but things could have been better on the back nine. He made three consecutive birdies on the front nine to stamp his authority on the tournament.

But his back nine was uninspiring. He made one birdie at the par-4 11th hole to take a two-shot lead but made a bogey at the par-5 16th hole. On the other hand, Schenk made three birdies in his last four holes to reach 18-under-par.

"I feel like the game’s in a good spot, so go out there tomorrow and see what happens," Burns said after his round.

"I just think late in the day the greens, they’re not quite rolling as well as they were early in the day, so hopefully those will go in tomorrow."

Matthew Wolff is one shot behind Schenk on 17-under-par after a third-round 65 and Andrew Putnam is on 16-under-par with Burns.