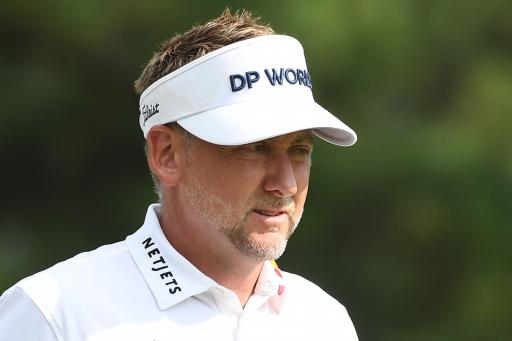 The Postman, 45, uploaded a hilarious image to his Twitter profile @IanJamesPoulter captioned: 'If you call Poulter "Rodney Trotter" you'll be removed in a Reliant Robin.'

His post was a reference to the popular British sitcom Only Fools and Horses starring David Jason and Nicholas Lyndhurst as the Trotter brothers.

PGA Tour commisioner Jay Monahan appeared to get fed up with fan taunts this season and Sunday's epic playoff at the BMW Championship in Baltimore, Maryland, was the final straw.

Monahan told the press, "when you hear 'Brooksy' yelled or you hear any expression yelled, the question is, is that respectful or disrespectful? That has been going on for an extended period of time. To me, at this point, it's disrespectful. And that's the kind of behavior that we're not gonna tolerate going forward."

Poulter is an avid user of social media and frequently posts content poking fun of himself and others.

In March this year he posted a video mocking Tyrell Hatton, Henrik Stenson and Rory McIlroy for shooting a collective score of 29-over par.

What a bunch of muppets, Poulter reflected at the end of the short clip.

He is still hoping to qualify to play for Padraig Harrington's Team Europe at Whistling Straits in a few weeks' time.

The full teams will be announced after the BWM PGA Championship at Wentworth Club on 12 September.

Poults will be hoping he will be packing his bag for Wisconsin - perhaps for the last time as a player.

RELATED: PGA TOUR TO CRACK DOWN ON BROOKSY SHOUTS

Team USA are currently the bookies' favourites to reclaim the Ryder Cup from Team Europe.

Bookmakers have Steve Stricker's side at 8/15

NEXT PAGE: POULTER VENTS ON SOCIAL MEDIA ABOUT ROWDY FANS