Brooks Koepka has been doing his best to get into Dave Portnoy's head ahead of their big charity match at Liberty National on September 7. 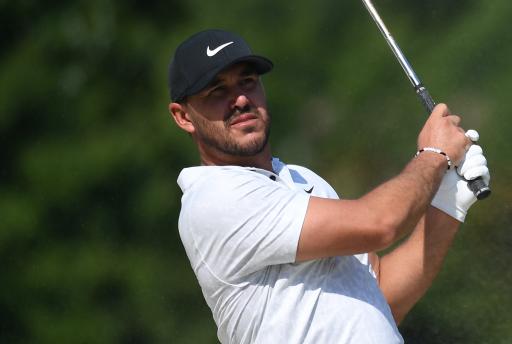 Brooks Koepka has been enjoying himself in the lead-up to his much-anticipated charity golf match against Dave Portnoy, the founder of Barstool Sports.

The four-time major champion, whose season has been dominated by his feud with Bryson DeChambeau, recently took part in a promotional video with Michelob ULTRA.

In the video which Koepka posted on his Twitter page, he is seen hitting a driver with his left hand at a ball that is teed up on top of a beer bottle.

Although the ball didn't go very far, the lid came off the top of the bottle and Koepka picked it up and took a sip, smiling into the camera as if to be looking into Portnoy's eyes.

The eight-time PGA Tour winner will be playing left-handed against the sports television personality, who founded the popular Barstool Sports in 2003.

Both players will be competing at Liberty National Golf Club and they will be putting $250,000 on the line for each of their chosen charities.

Before Koepka takes on Portnoy on September 7, he will be trying to win the FedEx Cup this weekend at the Tour Championship.

The 31-year-old is currently ranked at 20th in the FedEx Cup standings, which means he will start on 2-under-par at East Lake in Atlanta, Georgia.

He will begin eight shots behind the points leader Patrick Cantlay on Thursday, who soared to the top of the standings after winning the BMW Championship last week.