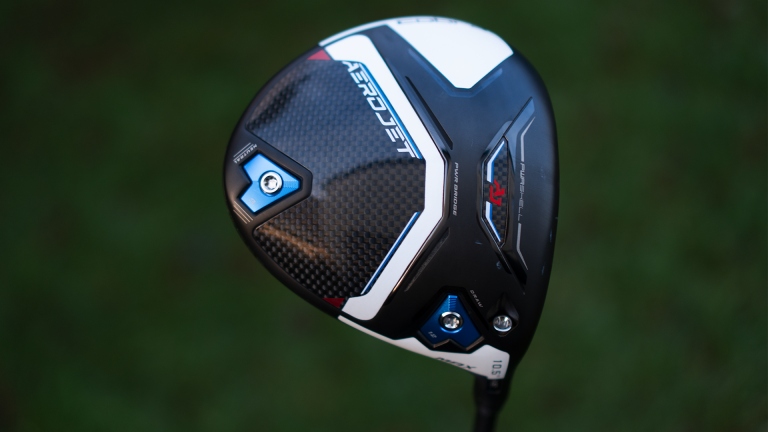 - Both drivers have very impressive and reassuring looks down at address - The technology produced solid ball speeds and overall ball-striking consistency. - Accuracy and dispersion were impressive even with off-centre hits.
- The Cobra Aerojet drivers weren't as fast as other brands such as Callaway.
Our score:
Overall:
5
PRICE: £429.00 YEAR: from 2023

Cobra has announced the exciting launch of the new Aerojet drivers, fairway woods and hybrids for 2023. We want to focus on the drivers in this review.

The new Aerojet models build on the previous design of the Cobra LTDx lineup with a new aerodynamic shape in all three models.

This new technology utilises an internal bridge structure that is above the sole to achieve a low, forward centre of gravity.

The PWR-Bridge design was essential to make room for the PWRShell Face Insert which delivers a larger Sweet Zone for faster ball speeds across the face.

There is also a H.O.T Face variable thickness pattern designed using artificial intelligence and features multiple zones with optimised thicknesses and shaping to deliver more speed and spin across the entire clubface.

What are the Cobra Aerojet drivers all about?

Cobra's Advanced Aerodynamic Shaping is the product of years of work with the fastest swings in the game. The Aerojet LS model features a streamlined frontal area with a curved crown and a peak as far from the face as possible.

This design helps to significantly reduce the drag through the swing to increase speed and superior aerodynamic performance.

The Aerojet driver blends low spin with more stability and a higher launch than the LS model with a fixed back weight of 12 grams.

The Aerojet Max delivers maximum forgiveness and trajectory height with an adjustable back and heel weight that can be used to create a draw bias.

The Cobra Aerojet and the Cobra Aerojet Max drivers serve similar purposes. They are both forgiving and offer consistent ball-striking, two qualities which suit a wide range of golfers.

The Cobra Aerojet Max will help players who's miss is a push or a slice because this driver has a higher launch and a slight draw bias.

In terms of the look and the design of the club head, the Cobra Aerojet is similar to the previous LTDx and Radspeed designs. It's almost as if the looks have been pushed into one to create the Aerojet design.

As you look down at address, the sole of the Aerojet is glossier than previous Cobra driver models. The new Carbon material is lighter and provides a good look, but we prefer the look of last year's Cobra LTDx driver.

At address, the look of the Cobra Aerojet Max driver is nice and instils confidence. The head is slightly bigger which promotes forgiveness and a larger sweet spot to hit.

With off-centre hits and strikes high off the club face, we were pleased with the consistency and dispersion of the Cobra Aerojet. It doesn't produce ball speeds as fast as the Callaway Paradym range, but we also achieved marks of 340 yards in distance too, so this aspect didn't disappoint.

While the Cobra Aerojet driver may not impress in the speed department compared with its market rivals, it does excel in feel and forgiveness which will appeal to a lot of golfers.

Alex averaged 174.1 mph in ball speed and 322 yards in overall distance. The average RPM was 2816 and the average launch angle stood at 14.7 degrees. The ball speeds were still impressive and consistent.

The Cobra Aerojet Max is mostly suited to golfers who are fighting a slice. The club head is slightly bigger and elongated. However, you shouldn't lose any ball speed with this club as Alex still achieved marks of 175 mph.

The spin rate was low which we were impressed with, as it is a Max model. The dispersion is to the left more often than the right, but this is because the Cobra Aerojet Max driver tries to eliminate the push to the right.

The Cobra Aerojet and the Cobra Aerojet Max drivers are mightily impressive with very few weaknesses. As we see in our video review above, they produce consistent distance and ball speed numbers which compete with any driver on the market.

Although we achieved faster ball speeds with last year's Cobra LTDx driver, this is not to say a different type of golfer couldn't go faster with the new Aerojet drivers and their aerodynamic technology.

Our final judgement would be that Cobra isn't as fast as Callaway this year, but this doesn't diminish the quality of the club. Both are aesthetically pleasing and forgiving at address.

The Cobra Aerojet range is less expensive and offers more value than some of its market rivals, so this is another department where Cobra excels and offers better value.