Is distance top of your checklist when searching for a driver? This could be the one for you. 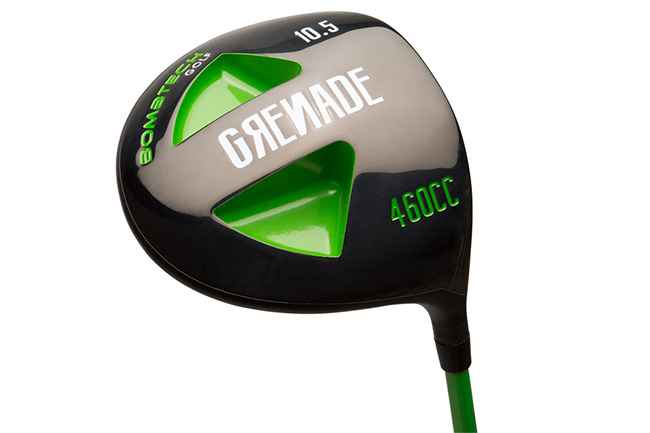 With “bomb and “”grenade” in the title, you won’t be surprised to hear this driver is long. Exceptionally long.

But for most players, for a big stick to make it into the bag, there need to be accompanying attributes on offer as well.

Two cavities in the sole of the club are dissected by a central bar, which Bombtech says reduces drag by 68%. My swing speed was up by around 2mph, and whether this was to do with less wind resistance, frankly who cares?

Like a grenade (or bomb), there is an explosion at impact. The first few times you hit this driver, you will do well not to recoil in shock, before inspecting the head.

Not only does it let off a deafening “thwack”, but it provides a lively, hard, crisp feel. There’s nothing quite like it on the market today. It will turn heads both on the range, and the course – be warned.

The initial ball flight is low, before it balloons into its apex….seemingly for ever. On average I was getting around 5-15 extra yards out of the Bombtech Grenade driver, compared to the market average.

The cavities in the sole of the club almost create a “T-zone”, and the sweet spot is directly behind this. Stray from the central area, and you will find yourself short changed.

Impressively, on centre and off-centre hits, this driver is impressively straight, which I didn't expect from a club which is clearly hell-bent on maximum yardage.

However, miss the sweet spot and you will encounter a serious reduction in distance, and the feel quickly deteriorates.

The stock shaft is meant to be “stiff”, but it has a whippy feel to it. The 460CC head is only 199 grams, and feels even lighter. This combined causes control issues throughout the swing.

Often, I found it difficult to square the clubhead, which led to some balls leaking to the left and right. And as we know, long and wrong is not the answer.

Monstrously long, and impressively straight. Loses a lot of distance on off-centre hits, and hard to control.