A smashing driver in every sense of the word, especially suited, if you're the type of player who believes that out-driving your playing partners matters.? 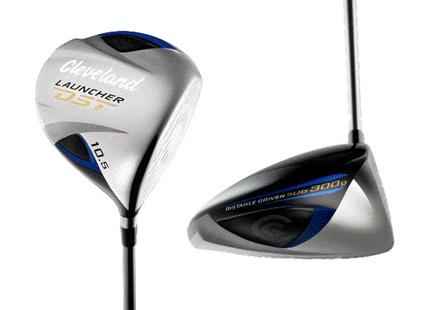 I managed to record a lifetime best 303-yarder on a simulator to claim the top-spot from esteemed colleagues in the golf media. A fluke, they said. A fusion of technique and equipment, I say!

The Olympic motto - Faster, Higher, Stronger - perfectly encapsulates the spirit of sporting competition. But when it comes to the discipline of smashing drivers, Lighter, Faster, Longer is perhaps more apt. That is exactly the case for Cleveland Golf's new Launcher DST driver

Monster drives notwithstanding, there's a lot to like about the DST. It looks really good, more like a traditional driver than some previous Cleveland models and has a crisp sound to match.

At address, the pear-shaped head looks like it means business. No decals, no alignment aids, just a sleek black finish and a slight toe-bulge.

The crown of the DST is half-a-millimetre thick, and by thinning out certain areas of the clubface, nine grams has been moved further back in the clubhead to reduce the need for additional weights in the rear. The ball flight and launch conditions have clearly benefited from this and as a result, the DST is a high-launch, low-spin driver that really does propel the ball off the face.

And while it certainly favours power over accuracy, that's not say that you'll be spraying it all over the place. A choice of heads is also available to accommodate more players. The standard offering is complemented by a draw version (three degrees closed) and a 430 cc Tour version (two degrees open with Diamana White Board shaft).

Cleveland has hung its driver hat on the theory that a reduction in weight leads to an increase in yards. Consequently it has produced a driver that weighs some 25 grams less that most of its rivals. Logically you may think that to propel a golf ball further, a big, heavy head would give it more of a wallop but the speed of the ball off the face is determined by how fast the clubhead is travelling at impact.

And no matter who you are, it's easy to generate more clubhead speed with a lighter club than a heavier one; less weight therefore equals more distance. In a nutshell and in a market where every gram - and every yard counts - removing 25 grams is a significant achievement. By using Lamkin's Ultralite grip, Cleveland have added just 40g to the mix, while the Diamana Ultra-Light Red 44 shaft tips the scales at a piffling 47 grams.

So with a total weight of just 292 grams, the DST is just about the lightest driver out there and just swishing the club gives an instant indication you can whip it through the impact zone.

But does it work? If you love nothing more than swinging hard and smashing big drivers, prepare to be impressed. In the hands of players of all standards at a recent press launch, the DST was thrashing balls obscene distances and proving a real hit with the long-driver lovers.

I should also report that I managed to record a lifetime best 303-yarder on a simulator to claim the top-spot from esteemed colleagues in the golf media. A fluke, they said. A fusion of technique and equipment, I say!