Available in four lofts between 8.5 and 11.5 degrees. Features an exclusive hosel design that makes it easy to adjust the angle of the head from the standard neutral factory setting to an increased draw-bias setting. 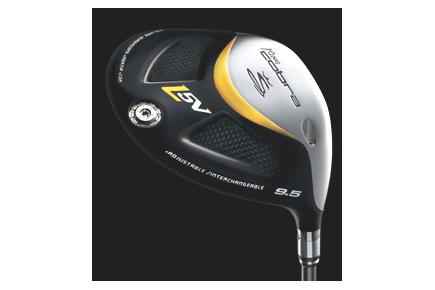 Though my electrical, plumbing and decorating skills are perhaps of mid-handicap standard, I'm a techno-phobe in the 28 handicap category when it comes to computers and mobile phones.

So it was with scary anticipation that I accepted the challenge to review Cobra Golf's L5V driver, supplied with its own wrench to adjust the clubhead to deliver a personalised ball flight.

Initially I'd been invited to try Cobra's latest S9-1 series of drivers at Manchester Golfarium's suite of simulators but despite an extended period putting half a dozen different options into play, an exasperated club-fitter decided that maybe the S9-1 wasn't the club for my narrow, handsy, moderately-paced golf swing, set in stone over 40 years.

As a last resort and with one eye on the clock, he offered the L5V with its adjustable face. I tried the second of two different settings - and Eureka! My low worm-burner ball flight on the launch monitor was transformed into a high, drawing arc that the currently in-form Cobra amabassador Geoff Ogilvy would be proud to replicate - albeit with an extra 80 yards of 'virtual' carry.

The confidence of knowing that a club fits the idiosyncrasies of your golf swing gives you a real boost - and since using it in competitive play the transformation in my tee shots has been remarkable.

While I briefly reverted back to the neutral setting for the purposes of this test and to compare the ball flights, it hardly instilled confidence knowing that the club isn't set up for me. Consequently, the low, power fade that has bugged me for most of my golfing career, returned to haunt me.

The Cobra L5V - the sound from which is far more user friendly than its L4V predecessor - is available in four lofts between 8.5 and 11.5 degrees and features an exclusive hosel design that makes adjustment of the head angle from the standard neutral factory setting to an increased draw-bias, such an easy process. Simply turn, loosen, twist and the head snaps firmly into place.

I quickly discovered how forgiving the L5V is when I took it out for its first competition and was able to replicate exactly on the course what I'd achieved in the confines of the simulator. Then and there I decided the 'L' in L5V didn't stand for Launch. It was Love at first hit!

By using a face insert and lightweight carbon composite crown and sole inserts, Cobra says its engineers have shifted the centre of gravity lower and further back to get the launch higher and and spin rate lower, reducing those destructive slices from which we can all suffer.

The combination of a swingweight screw (AFT) appropriate to the selected shaft flex (mine was an ultra lightweight 45 gram, regular flex Diamana Red Board M/Speed with a low kick point) and the golfer's action, says Cobra, enables the club to be matched perfectly with its owner.

Scott Rice, Director of Research and Development at Cobra Golf says: "The L5V clubface is the largest we've ever made, to maximise ball speed across the face, shifting the centre of gravity lower so more of the effective hitting area is where most golfers strike the clubface.”

In other words, Cobra has worked on making the most of miss-hits and I can confirm that even tee shots you know have been struck, low or high off the face, off the heel or off the toe, don't penalise your distance too much.

I even discovered that when preferred lies are in force, the low CG will help nip the ball off the turf as long as you allow for a low, fading ball flight. Even with a draw bias setting, shots hit off the deck are tough to keep straight.

A nice touch finally was the ample black and gold headcover - so many are too tight a fit - with a magnetic flap for ease of extraction.

Though compared with the Cobra S9-1 series and some of the latest drivers revealed at the PGA Show in Orlando, the Cobra L5V has been around for a couple more months, it has certainly made a big impression with me and well worth considering in its price range.