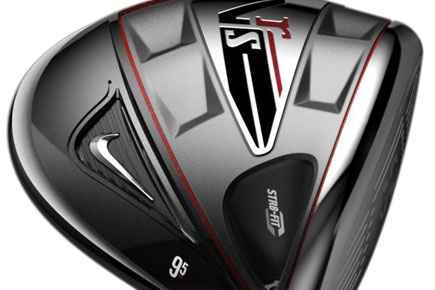 Delivered a penetrating flight under the wind

It's not ideal to take a new driver almost straight out of the box and with a couple of swishes, strike your initial shot down the first fairway of what is recognised as the toughest course at St Andrews!

But needs must when the sample Nike VR_S STR8-Fit driver arrives by courier just minutes before I was due to catch a train north for meetings (and a little research) at the Home of Golf.

It had survived the five-hour journey and spookily I could almost hear it rattling in the bag to get out to show what it could do - albeit with an early morning tee-time as rain swept across the hallowed links. And not even enough time to warm up on the St Andrews Academy range the other side of town.

I needn't have worried - the driver was pre-set to a neutral lie (no need for the adjustable wrench at this time) and delivered a penetrating flight under the wind, between the bunkers that flanked the fairway.

Against the wind on the opening holes and needing length off the tee I was happy with the trajectory the club delivered but on the homeward holes would have preferred a little more flexibility in the shape of shot the club was able to produce. However, this has since been ironed out thanks to a few experimental twists and turns of the wrench to find a more compatible shot shape and ball flight.

For a couple of holes I put the club in the hands of a 10-handicapper 20 years younger who normally fires a firmer-shafted driver to a fair distance and he was mightily impressed with the Nike VR-S's performance.

Despite the regular shaft of the sample club - adjusted to an unfamiliar setting - he was able to add at least 10 yards to his own distances, though a little wider right of the accuracy he was used to.

He agreed that the lighter shaft helped to feel the head more at impact.

He told me: "The head felt a little heavier in comparison to the shaft but it was really powerful off the face."

I explained that this was exactly the reaction that Nike's head of product creation, Tom Sites had been seeking. More head speed at impact delivers greater distance - it's then a matter of adjusting the lie to maximise the accuracy.

By comparison with recent speed tests carried out by golfers at various Nike retailers around the world, the extra distances recorded in our limited sample test on a soggy day in St Andrews hardly match the 14 yards average claimed by Nike.

But there was still a discernable improvement

The only mild disappointment was in the headcover which comes with the driver. While it's easy enough to replace on the head, some savings have been made on materials and the loose fitting tends to make it too easy to knock off accidentally. On a couple of occasions I looked back to see it in the fairway.

There's no doubt the Nike VR_S STR8-Fit driver will deliver a longer than ordinary tee shot. And by experimenting with the adjustable wrench to find the optimum customised lie will offer a combination of extra yards and improved accuracy. Can't wait for further opportunities when the weather improves to play in more stable conditions.