The JetSpeed is the first driver in the company's history to feature a Speed Pocket, which in turn, promotes less spin and greater ball speeds on shots struck below the centre of the clubface. You also get a 12-position adjustable sleeve in the JetSpeed driver which allows you to increase or decrease loft by up to 1.5 degrees. The weight on the sole of the club is not adjustable, it 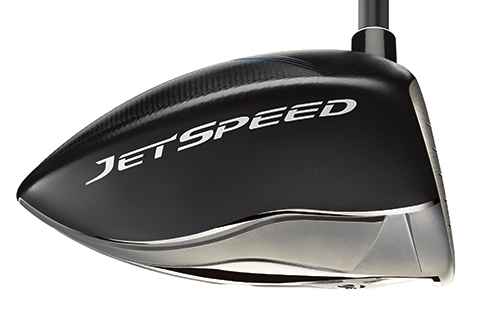 High launching, low spinning, forgiving and long - there's not much more you can really ask for when it comes to a big stick; sounds great at impact and the crown aids decent alignment; lightweight Matrix Velox T 49 shaft also adds to the distance and overall feel stakes; value for money at
Not a great fan of the sole design
Our score:
Overall:
4
PRICE: £250.00 YEAR: from 2013

I could hear the tut-tuts, sighs, and even the odd bang on the desk - a thud that no doubt spilt coffee over the keyboard - when we informed you of TaylorMade's latest, yes there's another latest, range of metalwoods a few weeks ago.

Having just digested everything the new SLDR driver, fairway woods and hybrids had to feed us last month - a range featuring a big dog with a 20g sliding weight and low-forward CG to promote high launch, fast ball speed and low spin - TaylorMade is now complimenting its lineup for 2014 with new JetSpeed metalwoods.

The JetSpeed is the first driver in the company's history to feature a Speed Pocket, which in turn, promotes less spin and greater ball speeds on shots struck below the centre of the clubface. You also get a 12-position adjustable sleeve in the JetSpeed driver which allows you to increase or decrease loft by up to 1.5 degrees. The weight on the sole of the club is not adjustable, it’s just factory-installed to improve swing weight.

On first look of the new TaylorMade JetSpeed driver which I tested out on the range at Hersham GC this morning, the most striking thing to note is that there's a Speed Pocket lying in the sole. This is the first time TaylorMade has incorporated its successful Speed Pocket technology into a driver before.

The design of the sole is pretty ordinary for a TaylorMade driver in my book but that's not necessarily a bad thing and the Speed Pocket certainly looks neat enough.

Placing JetSpeed down at address and I noticed a much bigger and wider clubhead than the SLDR. There's also more of an alignment aid on the ideal matte black crown with a unique decal design from front to back - a little bit like the R1 design just without the fancy colours. Alignment down my target line could not have been better - particularly with the small TM logo in the centre. The crown also reduced any unwanted glare standing over the ball. It's clean and classy.

Looks aside, however, it's the performance of the Speed Pocket - which was originally designed to increase the speed at which the clubface flexes and rebounds to promote faster ball speed - that excites me most here.

I know what you're thinking. Why would TaylorMade want to put a Speed Pocket in a driver, since the face is already as fast as the USGA will allow?

While you might not gain the advantages of a sliding weight mechanism in the back of the club as you do with the SLDR driver for the ultimate in shot shaping adjustability, you do at least get the benefit of a Speed Pocket when it comes to the JetSpeed. Like my horse-racing fanatical father always says to me on a Saturday afternoon, it's always better to take the SP.

The Speed Pocket in the JetSpeed helps create a much larger sweetspot - 25% larger in fact - that is lower on the face. This is a real coup for the high-capper who struggles to make solid contact with their drives. Effectively this means the more you mishit the ball, the greater chance you will have to improve your ball speed and increase your distance.

Inside the JetSpeed driver, there's a thick, thin crown that allows TaylorMade to move weight down and forward to obtain that low, forward CG. Combine the Speed Pocket along with the flex in the bottom of the club and flex of the entire face and you've got yourself one high launching, low spinning driver.

Taking dead aim down the 200-yard marker, the benefits were clear for all to see. Although I was using a 9.5-degree driver here instead of my usual 10.5 spec, you could still serve drinks on my flight, and balls appeared to come off the face with a little more fire power. I could feel the Speed Pocket working its magic as the face flexed at impact. Sound at impact was also one of the most heartiest sounds I've heard in a while. It's a real thwack rather than the usual tinny gun-shot noise I'd normally associate with TaylorMade woods.

With the 12-position 1.5-degree loft sleeve on offer here, I was also able to dial in my desired spec. That's the beauty of this club. Even if you buy one off the rack and realise you've not bought the right one to suit your game, just loft up and work out what works best for you. The loft sleeve compliments the low, forward centre of gravity nicely.

Drives were carrying on average around the 230-yard mark and running out in excess of 250. The SLDR was running out to 250 dead when I tested it out last month, while the JetSpeed was averaging 253. Drives with the JetSpeed were forgiving enough with an offline dispersion within the 15-yard mark on average. JetSpeed is a slightly longer driver than SLDR but I'd have to say they're both a bit like my bank balance when it comes to overall distance... there's not much in it.

The standard Matrix Velox T 49g lightweight shaft felt like it was further contributing to an increased clubhead speed and overall distance.

High launching, low spinning, forgiving and long. There's not much more you can really ask for when it comes to a big stick.

Not a great fan of the sole design but more than happy to see the trusty ol' Speed Pocket hiding in there behind the sweetspot.

£250 seems about right in this day and age of golf driver technology and for £100 cheaper than the SLDR, this looks like the way forward.