The Titleist 910 D2 Driver is available in 8.5, 9.5 and 10.5 degree lofts in right and left-handed models. The 910D2 (460cc) is made for 'maximum playabilty and forgiveness', the 910D3 (445cc) version has a deeper face and lower centre of gravity to generate the boring, penetrating flight, the pros and top amateurs prefer. Price includes 'cat-in-the-hat' headcover, pouch, wrench (capable of adjusting the hosel and head to 16 settings) and a performance guide. High quality shaft options. Screw set available as an extra. 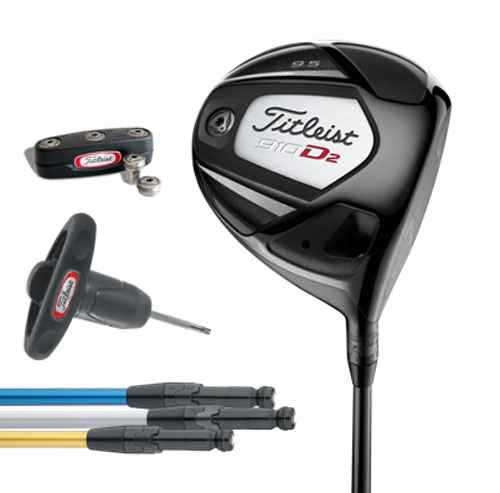 So what have I got in common with Ryder Cup stars Ross Fisher and Rickie Fowler? As that midget magician Paul Daniels might say...'not a lot' - apart from being male, right-handed golfers - and with a distinctive golf swing.

The real answer is we're all currently using the latest Titleist 910 driver . Mine, however, is the 910 D2 version with a 460cc head and a more forgiving, whippier shaft. Their's is 445cc (910D3) prototype powered by what can only be described as a very stiff graphite poker!

In essence their clubs look the same as my review sample at address - with a cool-looking black clubhead - but address position is where the comparison abruptly ends.

My resultant swing will deliver the ball on a gentle arc to around 220 yards - their's will crush an identical Titleist ProV1x on a penetratingly powerful trajectory some 100 yards further!

However, I doubt the feel they get from their clubs is any more satisfying than the tingle of soft vibration generated through my fingertips when I catch the ball in the meat of the clubface of my new best friend, the 2010 Titleist 910 D2.

This driver is the first Titleist has made with adjustable hosel - some two years after the first with similar adjustable of their rivals, which include Callaway (I-MIX), Nike (STR8-FIT) and TaylorMade (R9 TP).

Each driver can be fitted to 16 different do-it-yourself settings, though Titleist recommends regular club golfers first take the advice of a local designated fitter able to use the company's exclusive Sure-Fit technology. Moveable weight make the options even more numerous - but let's not go there, yet.

For my fitting at Walton Heath Golf Club, I had the benefit of advice from one of Titleist's Tour van staff Phil Dimmock, who services the needs of its high profile professional players like Fisher and Rory McIlroy as they travel around the European Tour's multi destinations.

Mine was set at A4 to maximise my swing speed - a pedestrian 94mph - and add more height to the low, boring trajectory I usually generate.

Admittedly, my fitting turned into more of a golf lesson to maximise the club's technology but the result was a faster ball speed, more consistent height and a ball flight that transformed my power fade to one that flies mostly straight - and even with a previously unseen touch of draw. Above all it's a ball flight I can control and rely on.

When my sample 910D2 club finally arrived and I was able to use it at the new Las Colinas Golf and Country Club near Murcia in Southern Spain, I was delighted by the feel and the new trajectory it helped deliver.  I look forward to many happy hours with my new toy.