The game-improvement K15 driver (9.5, 10.5 and 12-degree lofts) is engineered to help golfers bring their shots back on line and back in play using 'Straight Flight Technology'. Has a little more weight in the heel than the G15, identified with a slightly different sole profile. This helps rotate the clubface to a more square impact position. TFC 149D graphite shaft flexes: L, Soft R, R, S and X 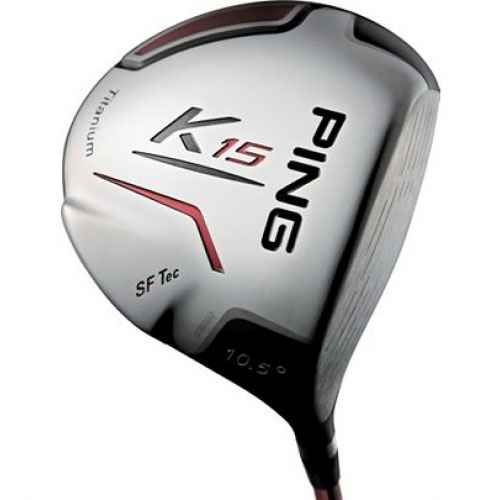 I believe I may have found the simple secret to my long-time inability to get my drives satisfyingly airborne - and all it took was a little experimentation with the latest K15 driver from Ping.

Having persistently failed to get higher launches with a series of 11.5 to 12- and 13-degree drivers of various brands in a  mistaken belief that more initial, built-in loft would generate a higher launch, I accepted the challenge that the 10.5 degree K15 driver offered and 'choked down' a little.

As a right-handed player I slid my hands down the shaft about half and inch, so my right thumb was touching the 'P' in Ping, gripped softly as Freddie Couples had suggested in a recent golf tip, and swung smoothly.

Whoa! Drive after drive delivered the penetrating but higher launch trajectory I'd been seeking for months and gave a welcome boost to my confidence, especially with the solid feel from the 460cc titanium head.  It's apparently achieved by concentrating more weight in the sole near the heel, which in turn helps rotate the clubface to a more square impact position.

Ping claims more forgiveness, stability and higher ball speed through this minor tweak to its sole shape compared to the G15. And I can testify to that following our initial review of the 12-degree G15 driver.

Combined with the K15's game-improving Straight Flight Technology, my shots flew higher and even started to draw back on line, making almost every fairway wider and more accommodating from which to hit approach shots. The regularl TFC 149D graphite shaft flexes added to the overall appeal.

The confidence this driver gave me allowed me to make a backswing that was longer and consequently more powerful at impact. The result more accuracy and at least 10 more extra yards through the air and the opportunity to hit more loft into the greens.