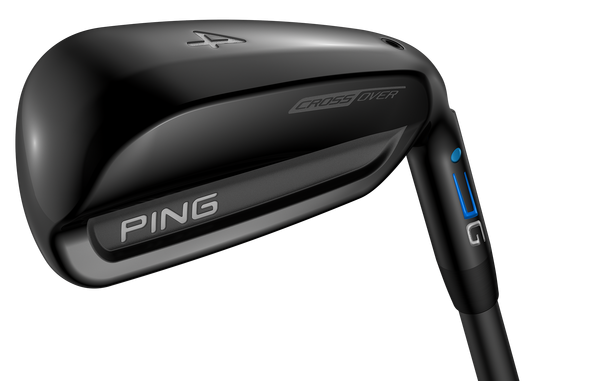 An exciting PING product, that will appeal to golfers who do not like the aesthetics of hybrids, but want more forgiveness than what is on offer from a long iron.

The hybrid is putting 3-irons out of business. With a heap more forgiveness on offer compared to a long iron, the rescue club has enamoured itself with golfers worldwide over recent years.

But not everyone has made the switch. Some don’t like the chunky aesthetic of a hybrid, while others bemoan the lack of workability on offer.

PING’s exciting new "Crossovers" hope to appease this demographic, with a club designed to provide “the distance of a hybrid, with the control and accuracy of an iron”.

We can see this one being slightly Marmite in the sense you will either love it or hate it, but we just happen to love Marmite.

The Crossover looks like an oversized driving iron. The face of the club looks the same as a regular iron, while the back is similar to a super game improvement club.

While you can still see a sizeable amount of the back of the club when addressing the ball, those who don't like the aesthetic of a hybrid should prefer the Crossover's sleeker profile.

The feel is reminiscent of an iron, both soft and crisp, and it provides lots of feedback. It feels springy off the face and produces a metallic sound, similar to that of a wood more than an iron.

The most impressive aspect of the PING Crossover is the amount of forgiveness it provides.

Extreme Toe Weighting increases the MOI, and we found there was incredible yardage on offer from all over the face. Impressively, in terms of forgiveness, it’s not far behind a hybrid.

While it is easier to work than a hybrid, it is still some way behind an iron in terms of controlling the ball flight, and hitting fades and draws. Like the aesthetics, it is a halfway house between an iron and a hybrid in the workability stakes.

It is naturally high launching, making it apt for attacking greens from distance, and is mid-to-high spinning.

An eye-catching new PING product that will appeal to golfers who do not like the aesthetics of hybrids, but want more forgiveness than what is on offer from a long iron.

Incredibly forgiving and easy to get off the deck. Feels like an iron off the face, and offers more control than a hybrid.