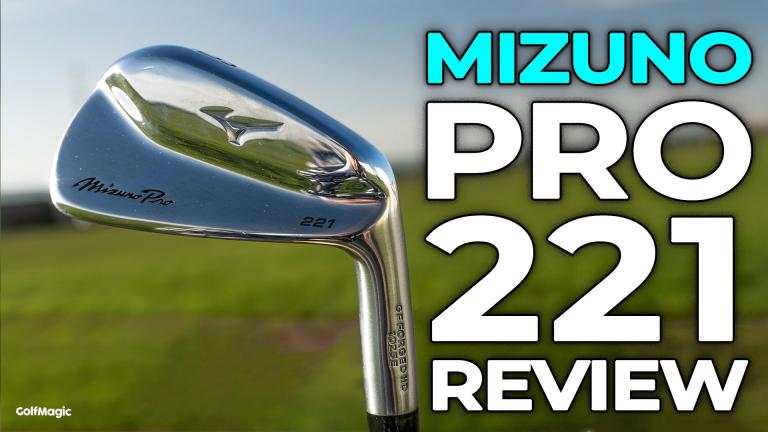 - The feel in the Mizuno Pro 221 irons is fantastic. They deliver fantastic ball speeds and they are aesthetically very pleasing.
- They are less forgiving and could suit tour players and low handicappers.
Our score:
Overall:
5
PRICE: £165.00 YEAR: from 2021

The Mizuno Pro 221 irons are the next in line from the MP-20 irons and one of the key changes are the aesthetics on the clubheads.

There is now a little logo on the clubhead and the numbering has also changed on the sole of the club. Instead of a white number, there are now black numbers.

The Mizuno Pro 221 irons (£165.00 per iron) are arguably the least forgiving of this latest Mizuno range that includes the Pro 223 irons and Pro 225 irons.

This means that they could be suited to tour players or at least low handicappers. They are grain flow forged in Japan which has given them a great feel through impact.

Mizuno Pro 223 Review | How Does It Compare To The MP-20 MMC?
Mizuno announce latest generation of Pro Series irons

The aesthetic differences are more clear in the short irons however throughout the set, there is thicker muscle behind the impact position in the sole of the club.

As they are bladed clubs, this reduces the drag and they are possibly suited to the performance of tour players or lower handicappers.

The Mizuno Pro 221 irons come with an optimized graduated tapered blade which helps to produce a more penetrating ball flight.

The centre of gravity and the sweet spot is fine tuned throughout the set. This helps to increase your ball speed and shot distance in general.

The copper underlay provides a nice soft feel from the clubhead at address and through impact. Alex's data shows that the irons deliver good height and distance when struck well.

The Mizuno Pro 221 irons are definitely a tour friendly club and many players could liken them to the TaylorMade P7-MC's.

The higher irons in the set have slightly smaller clubheads which is noticeable, but they still have a thick top line which makes them less intimidating to hit.

The feel in these clubs are fantastic and Alex couldn't say enough with regards to this feature. The Mizuno Pro 221 irons are certainly special set of golf clubs.