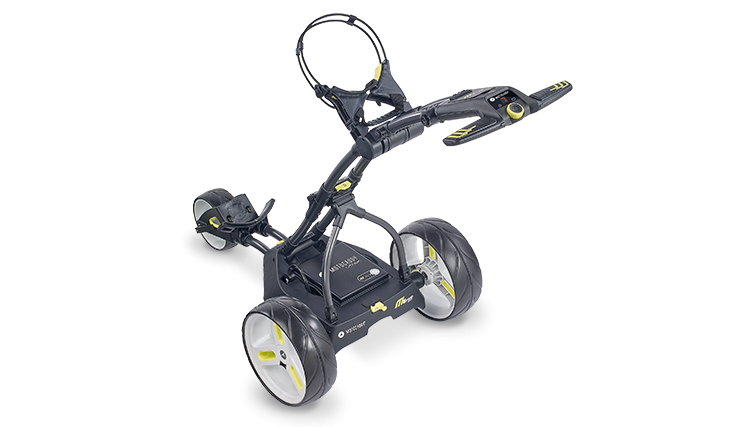 The Motocaddy M1 Pro is not a new trolley for 2017, but the addition of DHC is (standing for downhill control). It's the second model in the Motocaddy arsenal to add the DHC, following in the foosteps of the S5 DHC.

We took it out to the Shire London for a test.

As you would expect from Motocaddy, this is a classy product, boasting a premium aesthetic.

This Motocaddy model is suited to those that want an electric trolley that folds into a small size. As a London based golfer this is ideal for me, as it will be for many other players. It also means those with small cars will not have to worry about fitting it into their boot.

It does tip the scales a tad at 11kg, but nothing that would put us off.

For golfers that play on a hilly course, the DHC option is a big plus, as it stops the trolley shooting forward when terrain falls away from you. It kicks in autonomously, and is a seamless design. The trolley maintains a constant speed when moving from flat to downhill terrain.

Regarding erecting and collapsing the trolley, the processes can be done with ease once you are familiar with the order, which will probably take a few attempts.

The Easilock system holds the bag in place and is tried and tested in other Motocaddy products.

The trolley moves through the gears with ease, and we had no issues with balance.

Like all Motocaddy lithium batteries, the product is easy to charge and the battery is small and light.

Other bells and whistles include a USB charging port, parking brake, nine speed settings, and speed and battery indicators.

As the trolley does fold up into a small size, it may not be as sturdy as some other models in the Motocaddy range.

Perfect for a golfer that wants his/her trolley to fold into a small, compact size, and for those that play hilly golf courses.

High manufacturing and aesthetic standards as you would expect from Motocaddy.