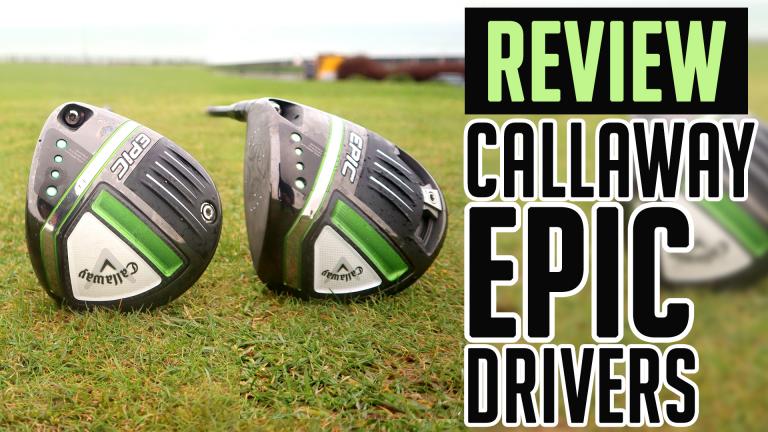 EPIX MAX offered unrivalled forgiveness, much improved colourways, each model has something unique to offer,
Top end of the price bracket
Our score:
Overall:
4.5
PRICE: £499.00 YEAR: from 2021

Callaway has officially launched three new driver models, featuring a brand new speed frame which according to Callaway has helped create its fastest driver ever.

The Callaway EPIC SPEED, EPIC MAX and EPIC MAX LS all bring something unique to the table, but which one suits your game? GolfMagic's equipment guru Alex Lodge recently put all three to the test to find out.

WATCH OUR REVIEW OF THE NEW CALLAWAY EPIC DRIVERS BELOW:

Our A.I.-designed Flash Face is specifically engineered to optimize the Jailbreak Speed Frame, promoting fast speeds across a more expansive area. Each face and each head geometry are uniquely enhanced in Epic Speed, and the super strength titanium promotes maximum speed, forgiveness and spin robustness.

Our fastest Epic Driver Head from a Cyclone Aero Shape
The advanced aerodynamic head construction promotes lower drag for higher head speed. The taller ribbon and flatter crown are engineered for a precise and more aerodynamic shape that can help golfers generate more speed from their swing.

Increased forgiveness from advanced composite design
Our proprietary Triaxial carbon covers a larger portion of the crown and toe, leading to weight savings of over 16 grams vs. a titanium crown. Callaway engineers have redistributed that saved weight to enhance forgiveness versus previous MAVRIK designs. An additional Triaxial carbon toe patch adds draw bias while saving weight to promote a powerful shot shape.

All of the above, plus:

Our most forgiving Epic ever
Epic MAX creates exceptionally high forgiveness, starting with a lighter, stronger Triaxial Carbon material that saves over 19 grams of weight vs. titanium. Our engineers have redistributed that saved weight to promote high launch and more forgiveness. This driver delivers an exceptional combination of a deep CG, draw bias and higher MOI to promote a tighter downrange dispersion that leads to straighter drives.

More control from Adjustable Perimeter Weighting
With a 17g sliding rear weight, golfers have extensive adjustability to promote the ball flight that they want to play. Combined with the OptiFit hosel, the Epic MAX provides up to 20 yards of shot shape correction.

All of the above, plus:

Shot shaping and control
The MAX LS is the most fade capable driver in the Epic family, and Adjustable Perimeter Weighting provides up to 13 yards of shot shape correction to fine tune ball flight. Combined with ultra-high MOI, the MAX LS provides a unique lower spin option for mid-to low- handicappers.

Last year's Callaway driver was the MAVRIK and with the brand going back to the EPIC line, we have seen a completely new look for Callaway this year.

It's certainly not as loud as previous models in terms of design and Callaway have toned it down a little and gone for something that looks sleek, modern and a slightly more simplistic than the old EPIC model.

The new colourway is also a huge improvement. Callaway tend to use bright colours with a hint of black, where as this year it's almost been reversed to make black the main colour throughout the club head, which we really love.

There are some huge design differences compared to the MAVRIK driver, but looking back at the previous EPIC line, this is more of a rejig.

EPIC MAX LS: The EPIC MAX LS is designed for mid-to-low handicap golfers seeking low spin. Alex was averaging a spin rate of 2070rpm which is extremely pleasing to see and if you're someone who wants a forgiving driver but seriously low spin, this will be the option for you.

EPIC SPEED: According to Callaway the EPIC SPEED is the brand's fastest driver ever. A seriously bold statement. Now although this driver did produce some impressive speeds, the difference in spin rate compared to the MAX LSduring the test was staggering. With an average of just over 2900rpm, it's still a spin rate that many golfers will be happy with, but in our personal opinion (and remember your results will be different to Alex's) we preferred the MAX LS due to the combination of forgiveness and low spin.

EPIC MAX: In terms of spin, the EPIC MAX sat nicely in between the MAX LS and the SPEED, with an average of just over 2600rpm. What we can say about the MAX is that it was definitely the most forgiving of the three, offering fantastic distances and dispersion from pretty much anywhere on the club face.

In GolfMagic's opinion, the Callaway EPIC MAX was the best out of all three drivers. It offered distance, a workable spin rate, but the forgiveness element was what won us over.

As we always mention, it's crucial to get custom fitted if you're looking for a new driver and make sure you try all three models so you know which driver feels right for you.

If you want to know even more about the new Callaway drivers then make sure you watch our in-depth review.