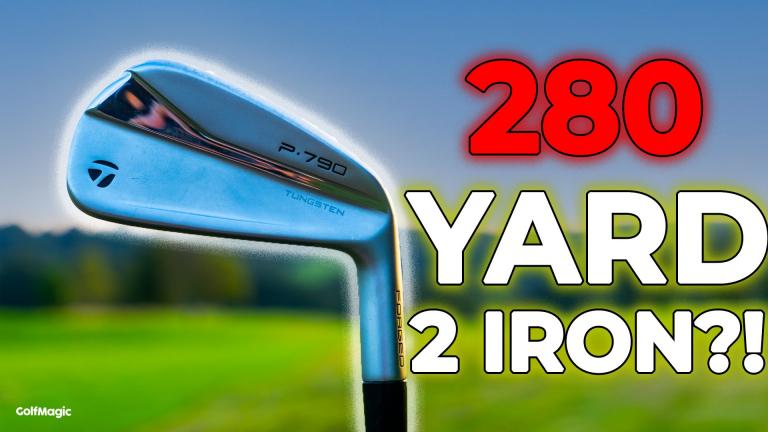 - The TaylorMade P790 UDI brings big distance increases and consistent accuracy dispersion.
- The straight-edged face can be intimidating when you address the ball.
Our score:
Overall:
5
PRICE: £229.00 YEAR: from 2021

Alex took the 2-iron to the Kingfisher Course at Mannings Heath Golf and Wine Estate to test its performance and shot dispersion on different holes.

The TaylorMade P790 UDI comes with advanced Speed Foam Air, which is lighter and has a different colour compared to the older Speed Foam model.

The club head uses weight to optimise the centre of gravity and makes the sweet spot larger. It may be an intimidating club to look at but it is a fantastic driving iron that is ideal for those who prefer irons over woods.

Take a look at our TaylorMade P790 UDI review below.

There are not many driving irons that are easy to hit. They are very straight-edged and the 16 degree TaylorMade P790 UDI is no different.

The older model, the TaylorMade DHY, has a much thicker head which instils more confidence when you look down on it. However, the P790 driving iron is very honest and gives a lot of feedback.

If you make a sweet connection with this driving iron, it is incredibly satisfying and it can definitely be used as a reliable fairway-finding club off the tee.

The P790 UDI offers low spin but a lot of distance, which is even more reason to use it off the tee. The club gives you feedback if you find the toe or the heel with your ball-striking, but this does not hinder your accuracy dispersion.

When Alex took the club both out on the course and to King's Golf Studio, there was a large dispersion in distance. He hit shots that ranged from 250 yards to roughly 290 yards, but this also shows the incredible distance that this club offers.

The main factor is the consistent accuracy dispersion. Each shot remained relatively straight for Alex, which is exactly what you want when hitting a driving iron.

If you prefer hitting irons to woods, like Alex does, then the TaylorMade P790 UDI could be the perfect club for you.

It provides reliability from off the tee box and if you have hit a shot off the toe or the heel, you receive immediate feedback from the clubface.

As this driving iron is very straight-edged and intimidating when you address the ball, it may suit players who are more experienced with lower handicaps.

At £229, TaylorMade have provided a slightly more affordable option when compared to their SIM2 woods.