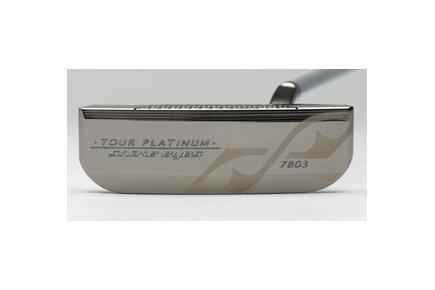 We tend not to associate Snakes Eyes with the sophisticated putter. The brand built its reputation on its wedges and more latterly on its sinister-looking Black-headed drivers. But given the chance don't overlook its Custom Tour putter line - the example I tried looked the part and felt the part on its first outing. And although I didn't hole many long tram-liners the feel, using a Callaway Tour IX ball was gorgeous off the face milled clubface. A distinctive aspect of the putter is milling pattern on the clubface which features a series of semi-circular scales set in an upward angle the edges of which catch a ball's surface regardless of where the contact point occurs. The result, say the makers, is quicker over-spin with less bouncing and skidding.

Looks: I opted for a shorter-than-usual 32-inch shaft on the 7804 version which at address was reminiscent of the popular Ping Piper S shape. I also liked silky anti-glare finish behind the ball.

Feel/Performance: The combination of the soft, tactile Snakes Eyes grip and the milled face (similar to Mizuno's Bettinardi models) generated great feel off the clubface and remarkable ground-hugging properties. It was hard to leave well struck putts short of the hole even on bumpy greens in early March and the two-piece shaft - graphite protruding from the handle; steel towards the hosel - helped deliver a delicious feel through the hands at impact. Overall it felt heavy in the head but that's no bad thing early season, when the greens are pushy. My sample didn't come with a head-cover because of the quick turnaround needed but it's included with regular orders.