One of the very best golf GPS watches the game has ever seen... 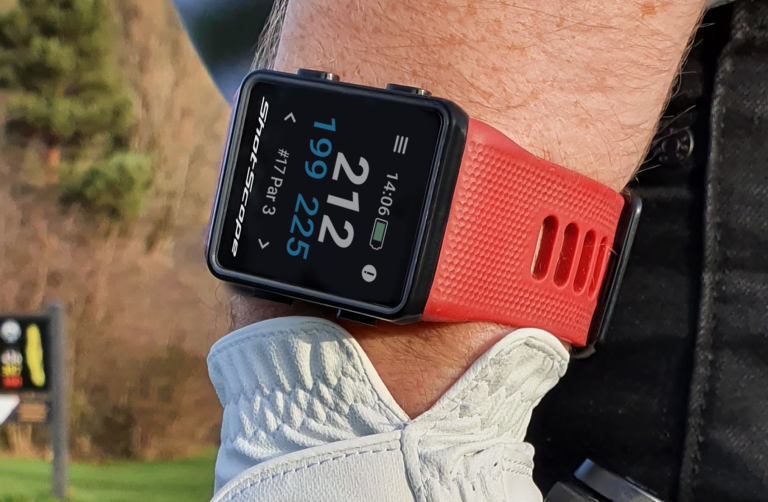 Incredibly accurate, easy to operate and setup, great battery life, very sleek and stylish design, clear screen, pin-point yardages, acts a self-training aid, Shot Scope app has everything you could wish for to improve performance
Recording number of putts can be a little fiddly each time
Our score:
Overall:
5
PRICE: £210.00 YEAR: from 2020

If you are in the market for an easy-to-use, sleek and highly accurate golf GPS watch that you can also use a self-training aid to shoot lower scores, then look no further than the brand new Shot Scope V3.

Available at a limited launch price of £180 right now (RRP £210), and in a range of five colours (black, grey, red, teal and purple), the new V3 instantly appeals out the box with its sleeker, thinner and more streamlined design compared to the former Shot Scope V2.

"Perhaps the most important feature of the V3 watch is its new appearance. With a significantly thinner and more compact profile, the V3 provides the wearer with a comfortable and more traditional smart watch appearance on the wrist." -Shot Scope CEO, David Hunter.

Okay a smaller design means a smaller screen, but it looks a lot neater to the eye before you even turn it on. The design appealed even more out on the course as it was not only comfortable but it was in no way restrictive during the swing. It also certainly doesn't look out of place if you were to wear it off the course, and the V3's refreshed daylight readable screen is as good as it gets.

Setup processes can be quite fiddly when it comes to GPS devices, but there are no such issues with the V3. Once you are logged in to the Shot Scope app, type in your details and ignite your Bluetooth, then you will just need to run a firmware update that takes around seven minutes. Then you are away.

There is also a really neat charging clip that makes the entire process a seamless one, and you can be at piece of mind that its battery life lasts more than 10 hours when you are out on the course (depending on which golf mode is used).

With 35,000 pre-loaded courses at your fingertips, simply head off to your chosen course, plug it in, and you are away. This process only took a couple of minutes. To my initial surprise, my first round with this watch was on a relatively unknown par-3 course in Surrey, so I wasn't sure if it would actually recognise it, but it did.

The other major benefit of the new Shot Scope V3 golf GPS watch compared to many other golf GPS watches on the market is that you get the opportunity to stick some electronic tags in the butt of your clubs to then have a Gary Neville, Jamie Carragher-style analysis of your performance at the end of the round.

Not only could I see where I went wrong on the course thanks to this clever piece of AI technology - aiding terrific levels of feedback for my next round - but I could actually see that I hit that tee shot 272 yards down the 10th instead of 320 yards like I bragged about to my mates in our WhatsApp Group Chat last night. Oh, and that I also only found five fairways instead of my initial claim of 10.

You can also take a closer look at each area of your game with an interactive performance dashboard, and a Medals feature which you will need to unlock as you progress when it comes to your driving, approaches, short game, putting, streaks and scoring.

In total, there are 100 different statistics for you to analyse if you really want to delve deeper into your game.

While all that is great, the most impressive feature for me when it comes to this new watch has to be its accuracy, especially compared to its rivals on the market today.

Most standard golf GPS watches tend to be accurate to within three and five metres, but with the V3 you receive accuracy that is within 30cm. Yes, 30cm.

For a 14-handicap golfer like myself who cannot hit to the yard so to speak, just knowing how far I have got to the the front, middle and back of the green is really all I require on the course. As long as that is accurate, I am sold, and the V3 delivers this brilliantly along with carry distances to hazards to help you avoid those big numbers out there.

"Shot Scope technology has been used by tens of thousands of golfers worldwide recording more than 50 million shots and our automatic performance tracking has helped amateur golfers to improve on average by three strokes." - Shot Scope CEO, David Hunter.

The only time you really need to get fiddly with the device is when you reach the green as you have to use Shot Scope's cool Pin Collect feature, and you just have to click how many putts you took once standing by the flagstick. I guess it would be nice if the device automatically calculated your putts for you on each hole, but I guess that would be quite freaky if it actually did.

There was only one time when a score had not been tallied up correctly on a particular hole, but when this happens you can amend the score by adjusting it in the app on your phone or laptop.

One of the very best golf GPS watches the game has ever seen.

Shot Scope V3 is easy to use and setup, it's one of the sleekest golf watches we've ever worn, and it's also the most accurate. Throw in the fact it works as a self-training aid and you have the complete golf GPS watch on the market this season.

It's available in five different colourways so you can pick and choose the one you feel most comfortable wearing both on and off the course.

Some features will take some getting used to as there are just so many with which to take full advantage of and improve your game, but once you do you will unlikely want to use anything else.