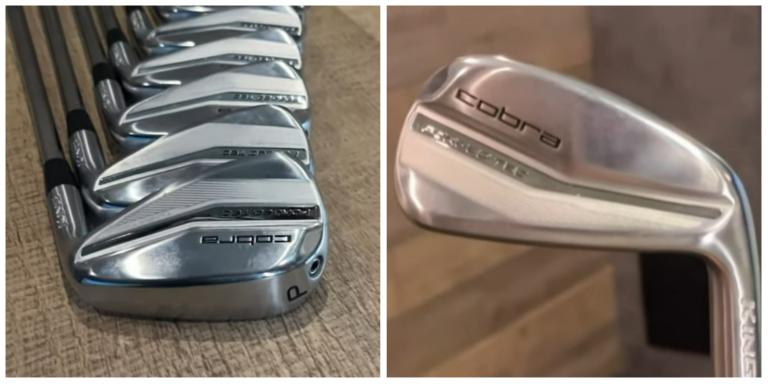 - The Cobra Forged Tec irons are incredibly forgiving and they are a player's distance iron at a competitive price.
Our score:
Overall:
5
PRICE: £999.00 YEAR: from 2022

Having already reviewed the Cobra Forged Tec One-Length irons, we wanted to go full circle and assess the performance of the regular Forged Tec set.

GolfMagic Equipment Editor Alex Lodge discovered that these irons deliver impressive distances and most of all, they offer superb forgiveness across the face.

Available at £999.00, they offer incredible value and they represent a more affordable option in a market which is dominated by expensive clubs packed with cutting-edge technology.

Take a look at our review of the Cobra Forged Tec irons below and tell us your views in the comments section, as well as any questions or requests you may have.

What are the Cobra Forged Tec irons all about?

The PWR Shell face is a new feature for 2022. This technology wraps around the clubface which increases ball speeds and significantly increases forgiveness.

The 1025 Carbon Steel construction allows for a sweet connection every time you find the middle of the clubface. The face has been forged as many as five times in order to maximise performance and optimal ball-striking.

The key point to make on the Cobra Forged Tec irons is their power. They offer significant game improvement services whether you are looking for more distance or more forgiveness.

These clubs aren't bladed which makes them suitable for a large number of golfers regardless of their ability and experience. The strong lofts deliver distance which is beneficial for mid-to-low handicappers.

Cobra has designed a superb look for the Forged Tec irons. It is an extremely sleek and elegant design which mirrors other brands such as Titleist and Mizuno.

As much as the looks are insignificant compared to performance, this set is aesthetically pleasing and they will appeal to many golfers on shop shelves.

When we tested the Cobra Forged Tec irons in the studio, the feel and forgiveness were certainly comparable to the latest releases from TaylorMade and Mizuno.

After testing numerous irons, woods and drivers in 2022, we've discovered that forgiveness is the aim of the game. Despite clubs such as the TaylorMade P770s and P7-MCs being top class, they are not as forgiving as this Cobra set.

As you can see in the video above, Alex was hitting the 7-iron around the 200-yard mark. With a smash factor of 1.46, you can be sure these irons deliver in ball-striking too.

We found that the PWR Shell face will save shots that come from the toe and the heel. You are forgiven for missing the middle of the clubface and this is what is so appealing about these irons.

Cobra hasn't relentlessly marketed these irons as much as other brands do for their own. We believe this is a reason why they have flown under the radar and haven't been held in equal regard as products from TaylorMade, Mizuno etc...

The Cobra Forged Tec irons are extremely reliable. As you can see in our video review above, Alex experienced solid results even when he missed the centre of the clubface.

At £999.00, they are competitively priced and as much as this iron set doesn't appeal to professionals, they offer guaranteed game improvement.